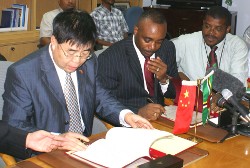 Roseau, Dominica – October 13, 2009……… Minister for Public Works and Infrastructural Development, Hon. Rayburn Blackmoore, acting on behalf of the Government of Dominica, has signed a contract with a Chinese construction firm, China Railway 17 Bureau Group Co. Ltd for the construction of a modern highway from the Capital City of Roseau to the Town of Portsmouth.

The signing ceremony for the construction phase of the road – approximately 44.877 km in length- took place at the Financial Centre in Roseau last Friday, October 9th 2009.

According to information revealed by officials from the Ministry of Public Works and Infrastructural Development, the cost of the project will be in excess of ECD $100 million. It is anticipated the project will take about twenty-three (23) months to complete.

The West Coast Road project is one of the four pillar projects agreed in the Memorandum of Understanding of March 23rd 2004, when the Commonwealth of Dominica established diplomatic relations with the ascendant power in Asia – the People’s Republic of China.

In his remarks at the contract signing ceremony for the construction phase of the project, Minister for Public Works, Hon. Rayburn Blackmoore, underscored the impact of the execution of the project on the local economy and added that all cement, steel and other materials will be procured locally. The Minister also stated that many Dominicans will be employed during the duration of the project.

The review and final agreement of the designs of the project were agreed upon in April, 2009. The newly proposed Roseau to Portsmouth road rehabilitation project is expected to commence with the construction of a bridge at the north end of Hanover Street across the western end of the Roseau River, along Eloit Avenue, with the road continuing through several coastal villages and terminating at Burroughs Square in Portsmouth

The Minister also stated that his Government is working to a plan to improve the island’s road network. According to him, through funding from the European Union, an extensive audit was conducted on Dominica’s roads. The Road Network Improvement Programme provided a comprehensive report on the condition of Dominica’s entire road network. 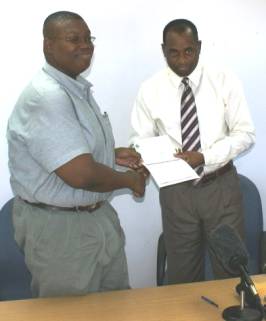