Address by the Honourable Roosevelt Skerrit, Prime Minister on the Occasion of the Seventh Anniversary of the Establishment of Diplomatic Relations with the People’s Republic of China, Chinese Embassy, March 25, 2011.

The Concise Oxford Dictionary describes ‘relations’ as ‘the way in which two or more people or groups feel about and behave towards each other’. It describes ‘friend’ as ‘a person or entity with whom one has a bond of mutual affection’.

Ladies and Gentlemen, I leaned on the trusted Oxford Dictionary because I wanted to be sure I was using the terms in their correct context.

Events of the past few weeks, particularly the earthquake and tsunami in and around Japan, have given cause for us to stop and reflect on how vulnerable we are as a small, sovereign nation, as well as to whom we can look and call ‘friend’ in times of adversity.

I welcome the opportunity this evening to reaffirm Dominica’s appreciation for and steadfast adherence to the principles of cooperation and friendship enshrined in the establishment of diplomatic relations between the Commonwealth of Dominica and the People’s Republic of China.

Needless to say, we also restate here and now, our support for and commitment to the One China Policy.

This reaffirmation is made not in deference to any material benefit we may have derived from these relations, but because of the consistent demonstration of interest and concern shown by the government of the People’s Republic of China in the welfare and wellbeing of Dominica.

It is comforting and reassuring to know that in testing times, there’s a friend to whom one can turn and a shoulder on which to lean. Also, that smallness of size, resources and population is no hindrance to how one is treated and respected by an obviously more endowed ally.

Ladies and Gentlemen, on my several visits to China and in my interaction with that government, both as Prime Minister and Minister of Foreign Affairs, it is instructive that small countries such as Dominica are never made to feel less than equal, both in terms of relevance and influence.

There is genuine appreciation for our perspective and sensitivity towards our peculiarities. This is the quintessence of genuine and meaningful friendship.

It is why we meet here this evening to celebrate the seventh anniversary of Dominica’s establishment of diplomatic relations with the People’s Republic of China.

Given the global economic crisis that has paralyzed economies small and large over the past four years, it could and would have been understandable had the government of China reviewed and revamped its technical assistance package to Dominica.

I have no doubt that consideration might have been given, but, by the same token, I am sure that representation would have been made by its representatives here in Roseau that these projects are of immense value and importance to the Dominican economy at this time.

In this regard, therefore, I would also like on this occasion to salute His Excellency, Ambassador Wang Zonglai for his demonstrated understanding of and appreciation for the economic peculiarities of Dominica and his own manifestation of commitment to the cause of aiding in our development.

Not only have the Chinese been generous and consistent in relation to major capital projects, but several communities and organizations across Dominica can attest to the responsiveness of China in terms of sponsorships of and support for various initiatives; many of which have never received publicity or public acknowledgement. This again speaks to the easy accessibility and responsiveness of Ambassador Zonglai and his staff at the Chinese Embassy here in Dominica.

But of interest, also, Ladies and Gentlemen, is the fact that during the period of our relations, China has never sought to extract its pound of flesh in terms of demanding anything of Dominica that Dominica was not willing to give.

International foreign policy today is dictated by pursuance and attainment of self interest. However, I cannot think of a single occasion on which China has said to Dominica ‘I need your support on this measure’, for any reason other than that it was good for humanity or world peace. This again is a hallmark of the enlightened approach China has brought to its foreign policy. It has been the catalyst for a deepening of relations, because, having been built on friendship and mutual respect, the sovereignty of Dominica is never compromised.

So, Ladies and Gentlemen, this is a joyous occasion for us this evening. We cherish and value each milestone in our relations with the government and people of China. We acknowledge the tangible support given in respect of the infrastructural development of our country, as well as the facilitation of our students in their quest for knowledge and scholastic achievement.

Equally important, we salute the continued respect for our sovereignty and the manifestation of genuine interest in and concern for the welfare and wellbeing of Dominica and Dominicans.

Your Excellencies, Distinguished Ladies and Gentlemen, conscious of the meanings given earlier by the Concise Oxford Dictionary, these are ‘relations’ and this is a ‘friendship’ …with which Dominica…is well pleased!!

Be the first to comment on "Address by the Hon. Roosevelt Skerrit, on the Anniversary of Diplomatic Relations with the People’s Republic of China" 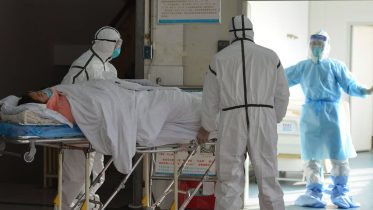 Massive spike in COVID-19 infections and deaths in China

China’s Hubei Province is reporting that 242 people have died from the coronavirus in a single day. Vanessa Lee reports. Subscribe to CTV News…

Election Day on Dominica is December 8, 2014