THERE is anger by the United Workers Party (UWP) parliamentary opposition in Dominica over the ruling last Monday by a judge of the St Kitts-based Eastern Caribbean Supreme Court in favour of that country’s prime minister and a Cabinet colleague.

In contrast, across in neighbouring Antigua and Barbuda, the parliamentary opposition is happy over a High Court decision that has serious implications for the administration of Prime Minister Baldwin Spencer, with a court hearing scheduled for tomorrow.

As the saying goes, in party politics “all things are possible” — including, of course, success and defeat at free and fair parliamentary elections as well as related court rulings.

In the case involving Prime Minister Roosevelt Skerritt and his education minister, Peter Saint Jean, the Opposition UWP suffered a big political blow over a challenge that dates back to the 2009 general elections pertaining to the “citizenship credential” of both politicians.

On Monday, the Eastern Caribbean Supreme Court dismissed the UWP’s appeal against a ruling by Dominica’s High Court judge, Gertel Thomas, that the UWP’s petition had failed to provide specific evidence against both the prime minister and his Cabinet colleague.

Not surprisingly, while Prime Minister Skerritt and his Dominica Labour Party (DLP) were rejoicing over the decision by the court, former UWP leader Ron Green — who, along with party colleague, Maynard Joseph, had challenged Judge Thomas’ ruling — were openly voicing strong disagreement with the judgement.

“I want to compliment Prime Minister Skerrit,” Green sarcastically declared in a statement, “on his ability and success in hiding the truth from the court. We go to the court for justice. Justice depends on trust and when you hide the truth, it means injustice. This seems to be one of the major weaknesses of our court system…”

However, for the well-known senior counsel of the Eastern Caribbean, Dominica’s Anthony Astaphan, who led the court battle for Skerritt and his Cabinet colleague, the decision was a “rewarding victory… and there is much to be learnt from the judge’s ruling”, he remarked in a telephone conversation with this columnist.

Coincidentally, Astaphan also happens to be the lead attorney in a current major political battle relating to electoral democracy in Antigua and Barbuda where the Government of Prime Minister Baldwin Spencer is facing a tough challenge from the Opposition Antigua Labour Party (ALP), now under the leadership of Gaston Browne.

In that Eastern Caribbean state, where the ruling UPP’s claims of damaging political erosion by the Electoral Boundaries Commission and related allegations of election-rigging have been emerging with increasing frequency, the Eastern Caribbean Supreme Court handed down last week’s significant ruling .

It had the immediate effect of preventing Prime Minister Spencer’s Government, as well as the Speaker of Parliament and the Boundaries Commission (which is dominated by the UPP), from any action that could result in unilateral and political partisan changes in the existing electoral boundaries for the 15-member House of Representatives.

At the last elections in 2009, the incumbent UPP retained power with a slim 9-7 victory, later to include in its parliamentary fold the single seat secured by the Barbuda People’s Movement.

There have since been rising angry complaints of political interference by the ruling party and Government in the functioning of the Boundaries Commission, with the latest development leading to the ALP resorting to the court to challenge stated unilateral, highly improper and discriminatory changes to existing parliamentary constituencies.

Controversies between the Government and Opposition reached a climax Monday when the High Court issued an order prohibiting the prime minister, any of his parliamentary representatives, as well as the Speaker, from making public a report prepared and submitted by the Boundaries Commission that includes controversial changes to existing constituencies.

According to the ALP’s Browne, who last year replaced former prime minister and long-serving party leader, Lester Bird, the UPP’s strategy was to “sneak the flawed…#157 Boundaries Commission report into Parliament, enact it into law with the consequence of preventing the Opposition from seeking redress in the courts….”

It would seem that the High Court was sufficiently influenced by the strength of the ALP’s petition to issue an order preventing, “with immediate effect”, the publication of the Boundaries Commission Report. And he has scheduled a court hearing for both parties to appear before him tomorrow.

The scene is therefore set for a court battle that involves the future of the Boundaries Commission, the appropriate demarcation of electoral constituencies and the conduct of new parliamentary elections, that could be held later in the year.

Ford on COVID-19: “The federal government is stepping up in a big, big way”

Be the first to comment on "Antigua’s latest political saga; Opposition anger in Dominica" 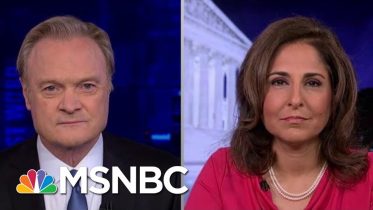 The latest Democratic presidential primary poll shows Democratic voters want a candidate who can beat Trump over one who shares their values. Lawrence O’Donnell…

Will Trump Testify During His Own Senate Impeachment Trial? | The 11th Hour | MSNBC

Cindy McCain: John would be disgusted by some GOP actions