The prime minister of Dominica says police have detained people for questioning in an attack that killed a man from Ireland and wounded a U.S. couple who own a hotel on the Caribbean island.

Roosevelt Skerrit said a team of officers is investigating the attack. He vowed in an interview Tuesday that those responsible would be punished. He also said it was a rare case of violent crime and should not create an impression that Dominica is dangerous.

The three foreigners were beaten by at least three men in an apparent robbery outside the Pagua Bay House hotel and restaurant in Marigot. The victim from Ireland was identified only as Joe Costello. Americans Rich and Alicia Davison have lived in Dominica for several years. 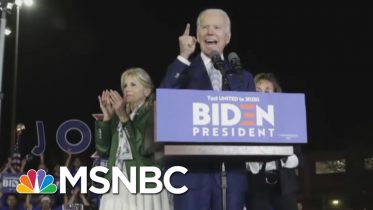 The Democratic primary appears to be narrowing to a two-person race between Joe Biden and Bernie Sanders. Mike Bloomberg dropped out and is transferring…

Did Trump Violate The Constitution Plugging His Own Club To Host Next G7? | The 11th Hour | MSNBC