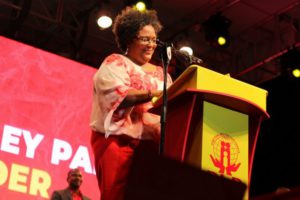 Mia Amor Mottley, 52, of the opposition Barbados Labour Party, (BLP), will be the next Prime Minister of Barbados after the BLP was declared the unofficial winner of Thursday’s general elections. Results early this morning showed the BLP won all 30 of the seats in the Barbados House of Assembly following the May 24, 2018, General Election.

The results came into the wee hours of Friday morning, following a day marred with the painfully slow counting of the ballots, long lines and confusion in some polling stations nationwide as some voters’ names were not on the list and dramatic court action.

But close to 4 a.m., the BLP’s headquarters erupted in celebration as news of their victory was announced and Mottley, the island’s first female PM-designate, delivered a victory speech, according to Barbados Today reports.

Mottley, who had faced open questions about her sexuality going into the election from the incumbent Democratic Labor Party, (DLP), insisted that it was not a time to celebrate but to unite the country and move forward to keeping the BLP’s campaign promises.

She also called for a weekend of “thanksgiving” and said she would name her cabinet on Monday.

Barbados know for is fresh fish grilled under the open night sky, perfectly paired with the world’s oldest rum are just two of the authentic Bajan experiences that will tout around the globe as the Barbados Tourism Marketing Inc.