For several Caribbean leaders, reaction to Venezuelan President Hugo Chávez’s death was swift and came in the form of 140 characters on Twitter while others like Antigua and Barbuda Prime Minister Baldwin Spencer were too “distraught and devastated,” and needed time to collect their thoughts.

In Jamaica, both Prime Minister Portia Simpson Miller and opposition leader Andrew Holness paid tribute to Chávez, the Jamaica Gleaner newspaper tweeted. Said Holness: “He was a good man with a good heart and had a special place in his heart for” Jamaica. Simpson Miller, in parliament when she heard the news, said of Chávez, “He was a friend of Jamaica.”

Prime Minister Roosevelt Skerrit of the tiny Eastern Caribbean island Dominica told The Miami Herald that he had lost “a personal friend” and was “deeply saddened” by Chávez’s death. Dominica not only receives oil at concessionary rates from Venezuela, it is one of the few non Spanish-speaking nations that is a member of ALBA, the Bolivarian Alliance.

“What we have done for ourselves alone dies with us; what we have done for others and the world remains and is immortal,” Skerrit said. “Comrade Chávez did all for the people not only of Venezuela, but for Latin America and indeed the world. He will be remembered also for bringing the Caribbean and Latin America together. I have lost a personal friend, a comrade a colleague. I am deeply saddened. The struggle continues.”

Haiti President Michel Martelly was among the first to react, tweeting in French that on behalf of the people of Haiti, he was offering his “sincere condolences to the people of Venezuela on the death of President Hugo Chávez.”

Haitian Prime Minister Laurent Lamothe told The Miami Herald: “Today is a sad day. The world has lost a great leader in President Hugo Chávez. Haiti will forever be grateful to him.”

Haiti like several nations in the English-speaking Caribbean is heavily indebted to Venezuela, using its discounted PetroCaraibe oil fund to pay for government programs. But even beyond the funds, Haiti’s city of Jacmel is where the Venezuelan flag was created.

A look at the legal challenges filed by Trump’s campaign 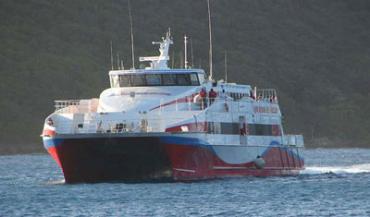 ROSEAU, Dominica, Friday June 10, 2011 – A new, year round ferry service will sail in the Caribbean in another three months, offering travel to…

Trump claims Americans need to flush the toilet ’10 times, 15 times, as opposed to once’

Breakdown on variants that have been identified in Canada | COVID-19