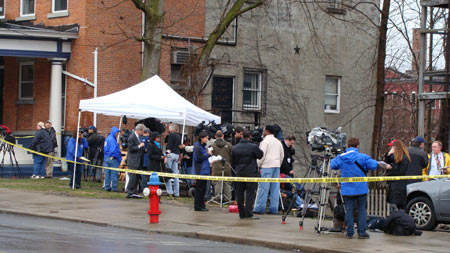 NEW YORK, NY, Tues. April 7, 2009: Two nationals from the Caribbean were among 13 innocent victims shot down by a crazed gunman in Binghamton, NY, police there say.

The two were Haitian couple, Marc Henry Bernard, 44, and Maria Sonia Bernard, 46. Both were at the American Civic Center to learn English and lived in Endicott, NY. They moved to the Endicott Terrace apartment building only about a year ago.

Maria Sonia reportedly worked at a McDonald’s on East Main Street in Endicott. Her husband, Marc Henry Bernard, 44, had just been hired at the same restaurant after losing his job at a local manufacturing company recently. They are survived by two children, ages 6 and 12.

The Bernards were among several other immigrants shot to death by  Vietnamese-born Jiverly Wong, 41, at approximately 10:32 a.m. on April 3rd at the American Civic Association located at 131 Front St in Binghamton wounding four and killing thirteen individuals including himself.

Four of the dead were from China. The others came from the Philippines, Iraq, Brazil, Haiti, Vietnam, the United States and Pakistan.

The carnage in Binghamton, a town of some 45,000 people about 150 miles (240 km) northwest of New York City, was the worst mass shooting in the United States since the 2007 massacre at the Virginia Tech college.
A letter from the gunman showed up at a Syracuse TV station yesterday, in which he blamed under cover cops for his sordid life.
Governor David A. Paterson has directed that flags on state government buildings across New York be flown at half-staff on Wednesday, April 8, 2009, in honor of the victims of the tragedy at Binghamton’s American Civic Association on Friday, April 3, 2009.

`On behalf of all New Yorkers, I wish to extend my deepest sympathies and condolences to the families, loved ones and friends of the victims of this terrible tragedy,` said the governor. `While we may never understand this senseless act of violence, our arms and our hearts must be opened to comfort those whose lives were forever changed.`

Dr. Vin Gupta, MSNBC Medical Contributor, reacts to the president being given an experimental antibodies treatment after contracting Covid-19. Aired on 10/02/2020. » Subscribe…

Widow responds to Trump’s attacks and gets standing ovation