Former FBI Director Bob Mueller talks about his distinguished half century of public service, starting as a decorated Marine officer in Vietnam.

A recipient of the Bronze Star (with valor) and the Purple Heart, Bob returned to the United States after his service in Vietnam and graduated from the University of Virginia School of Law. He became a federal prosecutor in San Francisco, and embarked on a career that would take him to the heights of federal law enforcement in this country, and to the helm of the FBI.

My interview with Bob Mueller is in two parts. The first part covers his childhood through his selection as the FBI Director. The second part, which we will publish later this season, picks up where the first interview leaves off – and covers his tenure as Director, guiding the FBI through a difficult and challenging post 9/11 world.

I should add a word about what is not in either episode – any detailed discussion of Bob’s work as Special Counsel leading the investigation into Russian interference in the 2016 election. Bob was clear when he testified before Congress about this work and his report, and that the report spoke for itself. He did not opine about his findings and does not do so here, either. One of the things I learned while working for Bob Mueller at the FBI is that you take this decent, honorable, and courageous man at his word. Because he is a man of few words, each word matters a lot and so it is worth listening carefully.

Bob shares with host Chuck Rosenberg in this first part (of a two-part interview) the story of his service in Vietnam, his time as a new federal prosecutor, and his ascent through the Justice Department to become the FBI Director. This interview with Bob Mueller is the only full one he has given since leaving public life, and it may be the only full one he gives.

If you have thoughtful feedback on this episode or others, please email us at theoathpodcast@gmail.com.

Find the transcript and all our previous episodes at MSNBC.com/TheOath and read The Mueller Report at

Fox hosts’ takes on Trump claim will give you whiplash 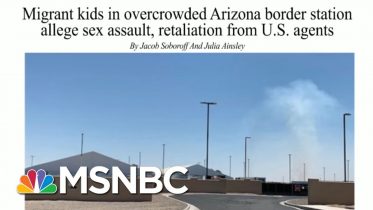 A 17-year-old Guatemalan boy told his story to NBC News of his time at the U.S. Border Patrol station in Yuma, Arizona. Reporter Julia…