Excursion Bus With Passengers From MSC Orchestra Crashes In Dominica 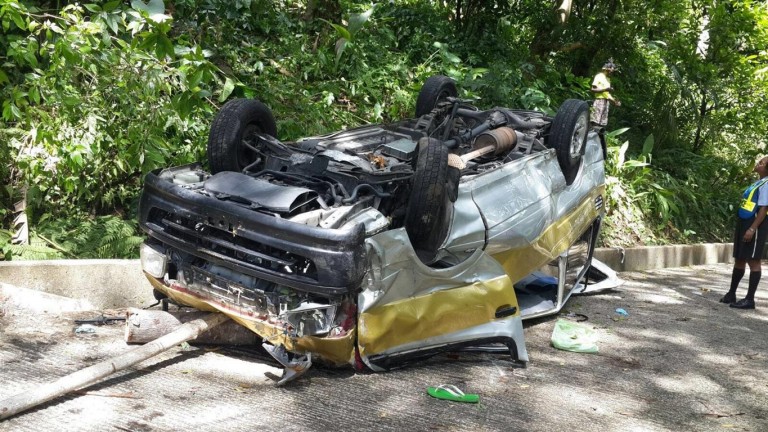 A newspaper in Dominica reports that an excursion bus taking passengers from a MSC cruise ship to a tourist attraction crashed today in Dominica.

An infant reportedly died in the accident, according to the online newspaper in Dominica.

The bus was heading on an excursion to Trafalgar Falls.

The newspaper says that five people have been taken to the Princess Margaret Hospital. MSC Cruises indicates in a statement (below) that seven passenger were injured.

The MSC cruise ship is the Orchestra. The cruise line says that the passenger had “independently booked through a third party.”

There have been a number of deadly bus excursion accidents involving cruise passengers.

Most recently an excursion bus was struck by a truck as the Royal Caribbean excursion was returning to the Freedom of the Seas in Falmouth, Jamaica, resulting in one death and multiple serious injuries.

Prior to that accident, two passengers from the Celebrity Summit were killed in Tortola, British West Indies when the excursion bus apparently lost control near “Round Hill” on the Cane Garden Bay Hill.
The cruise line earlier tweeted that “16 of 20 passengers reported injured, 2 critically.”

Cruise passengers from the Celebrity Summit cruise ship were seriously injured in an excursion vehicle mishap in the Caribbean islands. In 2009, a dozen passengers from the Summit were seriously injured when an open air excursion vehicle ran off the road in Dominica. We represented passengers against the cruise line and the excursion company in that accident. You can read information about the Dominica excursion accident in an article “Injured Visitors to Dominica Airlifted to Miami.”

There were two cruise excursion bus crashes in 2012 in Caribbean islands, both involving Royal Caribbean passengers.

“It is with deep sadness that MSC Cruises confirms that a tragic accident involving seven of its guests happened earlier today at approximately 11 AM, local time, in Trafalgar on the Caribbean island of Dominica.

The seven guests involved in the accident were five Italian and two Brazilian nationals. They were on their way to a on shore visit which they had independently booked through a third party.

Immediately after the accident, the guests were transported to the nearby Queen Margaret Hospital in Trafalgar and a support team from the ship has since arrived to the hospital to assist them in every way they can.

Simultaneously, MSC Cruises’ crisis team was activated and has already contacted all the families and relatives of the guests involved in the accident.

The guests were all aboard MSC Orchestra which was calling at Roseau, Dominica, for the day.

Since then, we are glad to report that two Italian and two Brazilian nationals are safely either already back on board or on their way. Regarding the young boy and his family, his parents are out of harm’s way but still at the hospital. I am unfortunately not at liberty to disclose the condition of the young boy, since the relevant authorities have yet to make a formal assessment. Having said this, I have also been reading that he has passed and we are led to believe that this is sadly the case.”

Taking Care of the Environment During Covid – December 17 2020

Trudeau’s change in tone on blockades “quite concerning”: Historian