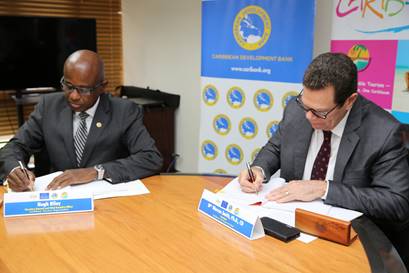 BRIDGETOWN, Barbados (23 June, 2017) – The Caribbean Tourism Organization (CTO) has received a €460,000 grant from the Caribbean Development Bank (CDB) to implement a project to increase the Caribbean tourism sector’s resilience to natural hazards and climate related risks.

“Global climate change and its impacts, including the increasing frequency and severity of extreme weather events, pose a significant risk to the Caribbean region and threaten the sustainability of Caribbean tourism. The CTO is pleased to have the support of the CDB to implement this project which will contribute to enhancing the resiliency, sustainability and competitiveness of the region’s tourism sector. Mainstreaming climate change adaptation (CCA) and disaster risk management (DRM) strategies in tourism development and planning is our duty to our member countries,” the CTO’s Secretary General Hugh Riley said.

The CDB / CTO partnership was formalized at a signing ceremony held on June 22, 2017 at CDB’s headquarters in Barbados. Speaking at the event, CDB President, Dr. Wm. Warren Smith, noted that the tourism sector makes an enormous contribution to the Region’s socio-economic development.

“Tourism generates high levels of employment, foreign direct investment and foreign exchange for our borrowing member countries and, given its multi-sectoral nature, it is a very effective tool for promoting sustainable development and poverty reduction. However, maintaining this critical role calls for adequate safeguards to be erected against the enormous threats that climate change and natural hazards pose to the sustainability of our Region,” said Dr. Smith.

Funding is being provided under the African Caribbean Pacific-European Union-Caribbean Development Bank- Natural Disaster Risk Management in CARIFORUM Countries programme, which aims to reduce vulnerability to long-term impacts of natural hazards, including the potential impacts of climate change, thereby achieving national and regional sustainable development and poverty reduction goals in those countries.

During the 19-month project implementation period, the CTO will support the region’s tourism entities with policy formulation, the promotion of best practices in disaster risk management and climate change adaptation, and the development of tools to enhance the tourism sector’s knowledge and awareness of disaster risk reduction strategies and the potential impacts of climate variability and climate change (CVC).

A training component will also be included to strengthen the ability of public and private sector tourism stakeholders to undertake adequate mitigation and adaptation actions to CVC. The CTO secretariat will also benefit from institutional strengthening to help provide technical assistance and ongoing support for tourism-related climate services.

The project is in keeping with 2017 as the International Year of Sustainable Tourism for Development, which has been designated by the United Nations General Assembly.

About the Caribbean Development Bank

The Caribbean Development Bank is a regional financial institution established in 1970 for the purpose of contributing to the harmonious economic growth and development of its Borrowing Member Countries (BMCs). In addition to the 19 BMCs, CDB’s membership includes four regional non-borrowing members – Brazil, Colombia, Mexico and Venezuela and five non-regional, non-borrowing members; i.e., Canada, China, Germany, Italy, and the United Kingdom. CDB’s total assets as at December 31, 2015 are USD2.7 billion (bn). These include USD1.4bn of Ordinary Capital Resources and USD1.3bn of Special Funds. The Bank is rated Aa1 Stable with Moody’s, AA+ Stable with Fitch Ratings and AA+ with Standard and Poor’s. Read more at caribank.org.