I agree that we should not allow politics to divide us and we should spread the Christmas cheer. But, it was not me who called an election during Christmas season, it was Mr. Skeritt.

Christmas is a time for family and friends getting together and celebrating. It is not a good time to call an election, because, politics is very divisive. Mr. Skeritt had a few months left in his mandate, there was no need to call a rush election. The decision to call the election now, was a sinister move on his part.

And, it was meant to use the Christmas season, to buy votes from the poor by giving them, free gas, stoves, food, clothing, galvanize etc. It is quite unfortunate that he would play on people’s poverty, in fact it is quite shameful.

With respect to the dual nationality issue, it not a question of “everyone has dual nationality”, the point is the law. We have a constitution that makes it very clear that persons who acquire foreign citizenship after age 21 are not eligible to run for office.

Mr. Skeritt is not above the law, if in fact, he has acquired French citizenship, the public has the right to know. If that citizenship was acquired after age 21, then, he is not eligible to seek office and, he must resign forthwith.

If in fact, Mr. Skeritt has acquired his French citizenship at birth, as he is claiming, then, he has not broken any laws. All he has to do is to go to the Electoral Commission and show them his documents, so that, they can ascertain how and when, he became a French citizen.

Ron Green acquired his American citizenship as a child, when, his parents filed for him to come to join them in the U.S. The same is true for Bernard Wiltshire who went to England as a young boy, so his British citizenship was obtained before the age of 21 years old.

These men are operating within the gamut of the law of the land, i.e. Dominica’s constitution. It is flawed logic to argue that because, they have dual citizenship, it is o.k. for Skeritt to have it. I am afraid the legal system does not operate based on flawed and bias arguments. And, I will repeat no one is above the law.

The Prime Minister has been guilty of breaking the laws of Dominica too often, he is setting a bad example for the youth. The message he is sending is that I don’t have to obey the laws and neither should you.

This is why, the young people are getting into all this crime, Dominica is becoming a lawless society. This is a trend that must stop a.s.a.p. The example must start at the top, and the Prime Minister must set an example and obey the laws of the land.

We had in Jamaica a situation where last election in that country, there were six MPs who ran as dual citizens, contrary to the constitution of the country. After the elections, the matter was taken up in court and they were all disqualified from seating in parliament.

Their seats were vacated and bye elections were called in those constituencies. If Mr. Skeritt fails to be honest with the Dominican people, then, the issue of his citizenship will be settled by the court.

And no amount of political maneuvering will save him. The Privy Council is still the highest appellate court in the Caribbean, so he will not even be able to use his political contacts, to circumvent the judicial process.

I know you might think that we (Gabriel) et al should stay loyal to the Labour Party. I can understand your loyalty to the party, we all grew up in the party.

I recall fond memories playing in Bells at the home of the late Jojo Karam, a Labour Party Stalwart, while he and my Uncle Mike Douglas discussed politics.

But, that Labour Party of yesteryear is no more. What we have in place is a very, very, very corrupt regime and a leadership that has lost its way. Nothing about Mr. Skeritt’s leadership resembles that of my father former Prime Minister Rosie Douglas.

In fact, Mr. Skeritt’s values are the anti-thesis to that of my dad and Uncle Mike. I am afraid, I cannot support a party that has departed from the values of the founding fathers.

This present DLP government is nothing, but a bunch of thugs masquerading as government. They have brought nothing, but shame and ridicule to our country. They have nothing to offer Dominica, and I say it is time for them to go.

We need a progressive alternative to the current regime. Dominica is at a critical stage, where, if we don’t bring back some order and respectability to our government, we will become a failed state.

I certainly do not want Dominica to become a failed state like Haiti or Zimbabwe. I am afraid that is where we are heading under Mr. Skeritt. In 2000, when, my father was alive, we called for accountability and good governance.

This current regime has not lived up to that promise. We have secret land deals, unjust enrichment by Mr. Skeritt, passport sales to rogue individuals, bin bobol, etc. I cannot support a DLP that is engaged in this kind of behaviour.

It is time to put a stop to these criminal activities, otherwise, we can say goodbye to Dominica and welcome to anarchy.

Recently, I was talking to a friend, who is the Consul General to a Caribbean country in Toronto; he told me that he just returned from Dominica.

He said that he was shocked to see that our country was so backward and underdeveloped. I felt quite embarrassed by his statement. He told me Debbie, you got to go back home and help your country.

I told him that my father spent his entire life in the struggle and I really felt that my family made enough sacrifices, so I am giving up the cause. I told him, I was going to be neutral during the next election.

He told me that you cannot give up on your country, that would be betraying your father’s principles. After learning of all the corrupt activities that Skeritt and his government were involved in, I felt compel to come out and take a stand.

I have a lot of friends and family in the DLP, so I felt really sad to have to condemn the party. But, my loyalty is to Dominica not my relations.

My father taught me to always put country first, above self interest. I do not like the direction that my country is heading under the Skeritt regime, and I make no apologies for condemning the regime.

I am tired of other Caribbean people laughing at us, saying, we are a backward country. Surely a country that has produce the likes of Eugenia Charles, Patricia Scotland, Rosie Douglas, Archbishop Kevin Felix et al can do better than that.

It is time for Dominica’s best and brightest to step forward and build a Dominica that we can all be proud of. We are twenty years behind our Caribbean neighbours in terms of our development, so we have to catch up to them.

We can only do so with a progressive government, one of national unity. My father felt, we can do it and so do I; in fact, he felt that we had the capacity to surpass our Caribbean neighbours.

We Dominicans are too talented and our country too rich in resources, to accept last place in the English speaking Caribbean. Are we not ashamed of this dismal record?

It is time for us to get serious and work together to build a progressive and prosperous Dominica. We owe it to ourselves, to our country and our children. 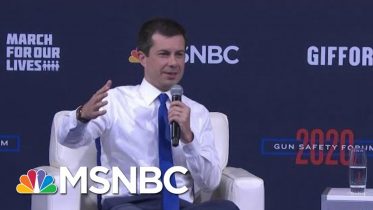 Mayor Pete Buttigieg on the Second Amendment: "In America, it is already the case that anybody, as far as I know, can own a…

Lawmaker stops mid-way through speech: I’m not going to read this