ROSEAU, Dominica, CMC – Nine months after ending their boycott of the Dominica parliament, opposition legislators Tuesday walked out of the Chamber after taking their oath as legislators.

In an immediate reaction Prime Minister Roosevelt Skerrit accused the United Workers Party (UWP) legislators of only returning to the Parliament in order to ensure that they receive a salary at the end of the month.

“…You come here you take your oath on the Bible and  you walk out just to register your name in the Treasury to get a salary,” Skerrit said.

But Opposition Leader Hector John told a news conference that the walkout is in keeping with the party’s “fight for democracy.

“This is why the United Workers Party has walked out of Parliament today.  It is because the strength of our Party lies in its commitment to fight dictatorship, tyranny and victimization.

“We cannot give up the fight. We call upon all fair-minded Dominican, to stand up with the United Workers Party, to restore good governance, democracy and the rule of law to our beloved Dominica, the land of the Lord,” John said.

Following the convincing 18-3 general election victory of the ruling Dominica Labour Party (DLP), the UWP boycotted the sittings of Parliament resulting in the Speaker, Alix Boyd-Knights declaring two of the opposition seats vacant.

The opposition had been claiming there had been a number of irregularities during the last general election.

However in the July 9 by-election that followed, former prime minister Edison James and Hector John regained the seats for the opposition party.

“The UWP has taken the relevant steps towards having a properly functioning parliamentary democracy with a government and opposition side. In this regard the Opposition Leader was sworn in, four senators were nominated and appointed and we have all taken the appropriate oaths,” said John.

“On the other hand, there has been absolutely no action taken by the government to facilitate electoral reform which we regard as indispensable in bringing about free and fair elections which is at the heart of our democracy,” he added.

UWP Leader Ron Green said the walk-out was part of the party’s decision to continue its campaign for electoral reform.

“Clearly everyone would agree that election reform is an absolute necessity to prevent a fraudulent election like what took place on the 18th of December. The United Workers Party will continue to ensure that we push as hard as we can to get electoral reform so that we can have democracy in Dominica,” Green said. 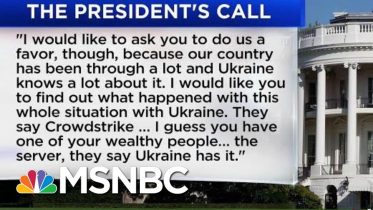 President Trump, in a phone call with Ukrainian President Volodymyr Zelenskiy, asked him to look into why that country’s top prosecutor apparently had ended…

What May Have Played A Role In Bernie Sanders’ Decision To Suspend Campaign? | Craig Melvin | MSNBC