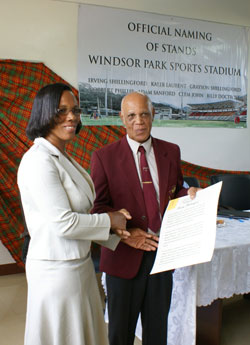 Roseau, Dominica– June 10, 2010……… A number of prominent Dominican cricketing icons have been recognised for their contribution to cricket locally, regionally and internationally.

Prior to the first one-day international between the West Indies and South Africa, there was a ceremony for the Official Naming of Stands and the Players’ Pavilion of the Windsor Park Stadium in honour of Irving and Grayson Shillingford, Norbert Philip, Adam Sanford, Clem John, Keleb Laurent and Billy Doctrove. The ceremony took place on Thursday, May 27, 2010.

In an address at the ceremony, Minister for Culture, Youth and Sports, Hon. Justina Charles said: “Today represents a special day in the history of sports in Dominica…..we are gathered to pay respect and show gratitude to those who have contributed and are still contributing to the development of sports…”

Hon. Charles noted that Irving and Grayson Shillingford placed Dominica on the international cricket map “By being the first Dominicans to represent the West Indies in Test Cricket in 1969 and 1977 respectively”.

According to the Minister, “The Shillingfords must have been an inspiration to Norbert Philip who followed their footsteps into the West Indies team in 1978”.

Mrs. Charles highlighted the inclusion of Adam Sanford on the West Indies team in 2002, the first person from the Dominican Kalinago community to achieve that distinction.

The Sports Minister highlighted the outstanding contribution of other Dominican cricketers who never got the opportunity to play for the West Indies, but excelled at the national and regional level. These include Mr. Keleb Laurent now deceased and Mr. Clem John.

The Players’ Pavilion has been named after Mr. Billy Doctrove. In 2002, this distinguished Dominican was appointed to the International Panel of Umpires. In 2006, Mr Doctrove’s career surged to new heights, when he was appointed by the International Cricket Council to the Elite Panel, thus being recognised as one of the top ten umpires in the world.

The Windsor Park Stadium will also feature the Roseau River End in keeping with Dominica’s reputation as the land of many rivers and the Botanic Gardens end, one of the oldest and the largest of its kind in the Western Hemisphere.

During his Senate confirmation hearing, Department of Homeland Security secretary nominee Alejandro Mayorkas spoke about the "horrifying" Capitol riot on Jan. 6 and promised…

Ont. Premier Ford defends his government’s plan to send kids back to school