Roseau, Dominica – August 4, 2010……….. Officials from the public sector, private sector and civil society organisations in Dominica participated in a two-day national consultation aimed at sensitizing stakeholders on the status of the CARICOM-Canada negotiations.

The consultation was one of eight such consultations being held throughout the Caribbean region. The July 29th-30th consultation in Dominica was organised by the Ministry of Employment, Trade, Industry and Diaspora Affairs in collaboration with the Office of Trade Negotiations (OTN) of the CARICOM Secretariat and the OECS Secretariat.

Speaking at the opening ceremony, Dominica’s Minister for Trade, Hon. John Colin McIntyre explained the critical differences between the new arrangements being negotiated with Canada and what presently obtains under the Caribbean–Canada Trade Agreement (CARIBCAN) which expires in 2011.

“In order to ensure continued secured access for marketable items from the region into Canada and to replace the non-reciprocal preferences under CARIBCAN with a WTO-compatible instrument that preserves and enhances CARICOM’s preferential access, CARICOM began negotiations with Canada for a free trade and development agreement. In addition to the goods sector, this agreement will extend to trade in services, a feature which was not present in the CARIBCAN coverage,” Hon. McIntyre stated.

Dr. McIntyre identified the services sector as an area which the CARICOM Region could increase exports to Canada.

“In terms of trade in services, it is believed that this area holds the greatest potential benefit for the majority of CARICOM Member States. This is particularly the case for the typical OECS Member State for whom the Services Sector account for as much as 60 percent of GDP.”

Under the proposed new agreement, Canada would also provide technical and financial support to CARICOM countries in an effort to address the differing levels of development and vulnerabilities associated with Small Island Developing States and trade related capacity building challenges.

Mr. Vincent Atkins, Trade Development Adviser of the OTN said that the new agreement will have a free trade component and a development component.

Speaking at a news conference following the end of the consultation, Mr. Lincoln Price, Services Expert in the area of investments, (OTN) spoke about the market access opportunities for Dominican products on the Canadian market. Mention was made of Dominican soaps, paints and varnishes and avocado.

Miss Natallie King, Services Advisor (OTN) underscored the growing importance of the services sector in Canada, noting that Canada is a large importer of services. The health and wellness sector and cultural industries were areas identified by stakeholders as niches Dominica could seek to exploit under the new CARICOM –Canada agreement.

Negotiations for a CARICOM-Canada Trade and Development Agreement started in November, 2009. The third round of negotiations will continue later this year.

Dominica’s Division of Trade led by Director of Trade, Dr. Eisenhower Douglas, has an important role to play in these negotiations. The Division, acting on behalf of the Government of Dominica, will articulate Dominica’s unique position on the various important issues.

All stakeholders in these negotiations are urged to cooperate and collaborate with the Ministry of Trade by making comments when asked to, all in an effort to ensure that Dominica’s interests and positions are adequately reflected in the final agreement. 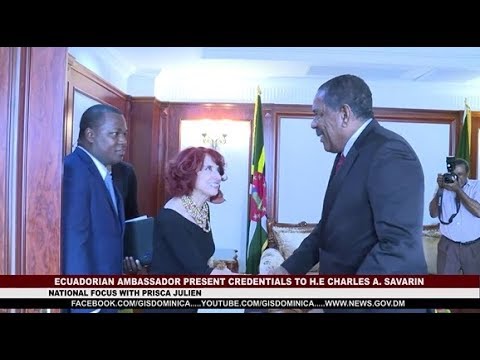 Marianne Williamson: US economy skewed in favor of few people