Ewwwwwwwwwww. That might be your reaction upon watching the new trailer for the return of The Walking Dead. It may also get you geeked up about the newest big bad on the scene.

EW has the exclusive on the new spot promoting the second half of season 9 (which returns Feb. 10 on AMC), and in it we get our first footage of Samantha Morton as Alpha of the Whisperers — who appears to already be up to no good, stretching and sewing a zombie-skin mask to put on her own face. It’s pretty gruesome, and a fitting introduction to the new villains of The Walking Dead, who claimed their first victim in Jesus during the midseason finale.

While AMC released key art yesterday of a masked Alpha, this represents the first (albeit somewhat obscured) look at an unmasked Alpha, and fans will be giddy to see that the shaved head of Morton’s TV Alpha mirrors the iconic appearance of the comic book version.

Watch the trailer for yourself above and prepare to be mildly disturbed. Unless you’re the type of person who thinks putting zombie skin on your skin is totally normal, that is. Either way, it’s worth watching.

Also make sure to check out our exclusive first episodic image from the midseason premiere of The Walking Dead, complete with scoop from showrunner Angela Kang. And for more Walking Dead intel, follow me on Twitter @DaltonRoss.

On his last day as Tory leader in the House of Commons, Scheer calls out PM Trudeau’s absence

When It Comes To Flying During Coronavirus Crisis, ‘Preparation Matters’ | The Last Word | MSNBC

Be the first to comment on "Exclusive: Watch Samantha Morton as Alpha in creepy The Walking Dead trailer" 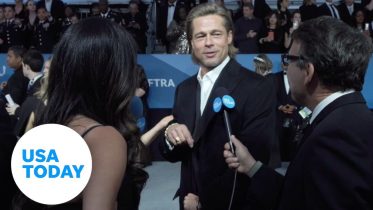 Brad Pitt talks to USA TODAY on the red carpet of the 26th Annual SAG Awards about the flu, getting older and being upset…

SE Cupp: I’m the first to criticize Trump, but jumping to this conclusion is reckless