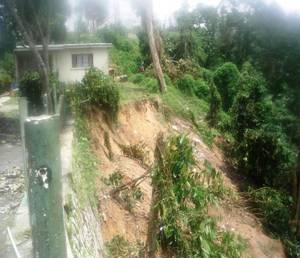 Five communities in Jamaica – Glengoffe, Bunkers Hill, Woodford, Cascade and the Portland Bight area – are on the way to making sure that they can deal with the anticipated impacts of climate change such as stronger hurricanes, flooding and drought.

This is being done as a part of a community based climate change adaptation initiative being implemented by the United Nations Development Programme/Global Environment Facility (UNDP/GEF).

“Since its launch in Jamaica, the programme has met with resounding success in helping communities to cope with climate change impacts as reported to us by our partners,” said Hyacinth Douglas, National Coordinator of the GEF Small Grants Programme. “In Glengoffe, after Tropical Storm Nicole, persons in the project said that even though they suffered minor losses and soil erosion, the project areas did not lose as much as before. This, they think is due to the measures being implemented under the project.”

The work of CBA is making a substantial contribution to the Jamaica’s twenty year development plan as it is aligned to Goal four of Jamaica’s Vision 2030. It also contributes to Outcome 14 in the plan which deals with Hazard Risk Reduction and Adaptation to Climate Change. Adaptation work is critical for Caribbean countries, who have been identified as being among the most vulnerable to climate change.

Already Jamaica’s economy has suffered adversely because of periods of extremely heavy rains and intense drought conditions. Several lives have been lost and billions of dollars in damage and losses reported, particularly in the agricultural sector.  According to the Economic Commission for Latin America and the Caribbean, Hurricane Ivan cost the country some US$580M or 8 percent of Gross Domestic Product. It was also estimated in recent times that Tropical Storm Nicole caused about US$151.9 in damage, with 13 lives being lost.

The expectation is that the initiatives being undertaken by the communities will reduce such severe economic and social impacts.

“Before the project the land was not being used for agricultural purposes because of the fear of land slippage but with the project the land is being used productively,” said Roosevelt Lawrence, President of the Glengoffe Community Development Committee.  “It is generating employment, preventing loss of property and lives, and providing an opportunity for people to help each other cope with the impacts.”

He and other residents have also said that their understanding of climate change has improved. The Glengoffe project started in April 2010 and so many of the measures being implemented, for example the intercropping of trees and the erection of barriers, are still in their infancy. It is expected that on maturity these should yield greater support in reducing/preventing soil erosion and land degradation.

The community has so far been able to achieve the success through the following:

The other four community projects are being implemented by, the Jamaica Conservation and Development Trust (JCDT) in Woodford and Cascade, the Bunkers Hill Community Development Committee, the Climate Studies Group/Mona and the Caribbean Coastal Area Management Foundation (CCAM) The organizations have been able to access grants under the UNDP/GEF programme of up to USD50, 000 to undertake concrete adaptation measures to help make their environment more able to cope with climate change. Money for the overall initiative to the tune of US$256,000 was provided by the Global Environment Facility Special Priority on Adaptation Fund.

In Bunkers Hill, the project will help the community to deal better with the problem of flooding which threatens its food production.

In Woodford and Cascade, the activities of the project will encourage sustainable farming practices such as greenhouse farming instead of hillside farming.

For the Portland Bight Area, there will be increased public education on climate change to ensure better adaptation planning.

The Climate Studies Group in Mona is working to document the experiences of the communities and prepare outputs that will influence policy.

According to the UNDP/GEF CBA, the success of its initiative has also been due in part to the work of volunteers, who have also advocated for change in environmental policies. Some of the local stakeholders that have assisted many grantees include, the Ministry of Agriculture through their extension services division, Rural Agriculture Development Authority (RADA), the Forestry Department and the Social Development Commission (SDC) and many more, who have provided their technical expertise and other in kind and cash co-financing to the projects.

Chris Hayes: “Never has it been more apparent that everyone, every single American, deserves access to good quality health care.” Aired on 10/02/2020. »…

Watch All In With Chris Hayes Highlights: September 2 | MSNBC

Derschowitz: If Trump Was Impeached For Bribery, Extortion, Issue Would Be ‘Very Different’ | MSNBC

Trump Picks Pence To Lead Coronavirus Response. Is The VP Ready For It? | The 11th Hour | MSNBC