Law enforcement officers are preparing for a different kind of election day threat: armed people at polls. Former DHS Secretary and former governor of Pennsylvania, Tom Ridge, joins Stephanie Ruhle to explain why President Trump needs to tell his supporters to back off for the sake of local law enforcement. Aired on 10/20/2020.
» Subscribe to MSNBC:

‘Gigantic Baby’: Trump Plummets As His Own Execs Back Biden | The Beat With Ari Melber | MSNBC 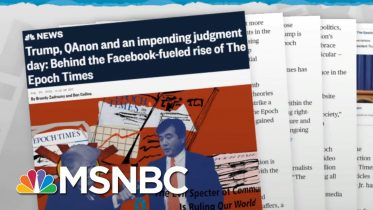 Rachel Maddow looks back at the anti-China activism of religious group Falun Gong and the media platforms it has cultivated over time, including, as…

Will Pennsylvania Break For Trump Again In 2020? | Morning Joe | MSNBC