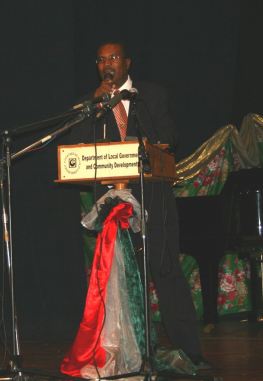 Roseau, Dominica – December 24, 2007………… Minister for Economic Development and Urban Renewal, Hon. Julius Timothy has unveiled aspects of Government’s plans to transform the Capital City of Roseau as part of its Roseau Development Plan.

The Minister made the remarks at the Ninth Inaugural Meeting of the Roseau City Council held recently at the Arawak House of Culture.

According to the Minister, the Plan seeks generally to address the improvement the physical environment of the Roseau Area, overall development of the City, particularly housing and improvement of the Tourism assets in Roseau.

Hon. Timothy, who is also the Parliamentary Representative for Roseau North listed a number of projects, which have already started, and others, which are on the verge of implementation. These include:

·        The Roseau Road Reinstatement Project, phase one to be funded by the Kuwaiti Fund

·        Continuation of the Bath Estate Apartments and Apartment Buildings for Yampiece

The Minister also unveiled Government’s plans to execute a number of projects in the longer term. These include:

·        The redevelopment of the Botanic Gardens to include creation of proper sidewalks and biking paths, replanting of foliage and showcasing of Dominica’s wildlife

·        The development of the Roseau River Promenade to be developed for use for recreation, possible boat tours and entertainment

·        The construction of two bridges and the installation of double lanes of the St. Aroment/Bath Estate Road to ease the existing traffic bottlenecks in the City

In his address which was also attended by the President of Dominica, Dr. Nicholas Liverpool, Prime Minister, Hon. Roosevelt Skerrit as well as other members of Cabinet, Hon. Timothy explained how the Urban Renewal Programme, which includes the Roseau Development Plan will be undertaken.

“It is our intention to pursue a path of Urban Renewal that involves a sensible and sustainable balance of innovation and commercial development. This Programme will be supported by appropriate tax incentives where necessary so as to encourage the support and ownership of the process by citizens and private organizations. The longer term objective of the Urban Renewal Programme has to be consistent with the overall Heritage, Nature and Green Eco-Concept for Dominica.”  (Ends)

Be the first to comment on "HON. JULIUS TIMOTHY SPEAKS ON ASPECTS OF GOVERNMENT’S PLANS THE CAPITAL CITY OF ROSEAU"

Mehdi Hasan: Biden Has Made Fighting White Supremacy From Day One | MSNBC