Joe Biden was finally elected Saturday as the nation’s 46th president, ousting incumbent Donald Trump in a heart-pounding, roller-coaster finish to a contentious race that capped a five-decade political career launched as a Delaware city councilman.

The decision came four days after an Election Day cliffhanger — and was finally settled by the more than 100 million people casting early votes against the backdrop of a raging coronavirus pandemic. Biden seized late leads from the president in several battleground states, including Pennsylvania and Georgia, as the massive mail-in votes backing the Democrat were counted from coast to coast.

In contrast with his conspiracy theorist opponent, the former vice president appeared each day after the election to urge patience and calm from coast to coast. In the end, the president-elect collected a record U.S. total of more than 73 million presidential votes as he promised to reunite a nation sharply divided by the Trump Administration. Official certification of the vote — barring legal challenges — was set for Dec. 14, when electors in all 50 states sign, seal and certify six sets of electoral votes.

The voting enthusiasm was reflected Tuesday, with turnout higher than in 2016 in numerous counties, including all of Florida, nearly every county in North Carolina, and more than 100 counties in Georgia and Texas. But when polls closed around the country, the vote tally was inscrutable.
That all changed the next day.

After Biden victories in Wisconsin and Michigan were announced, the Democratic challenger pulled closer to the needed 270 Electoral College votes and kept open at least two paths to victory, one without the prized Pennsylvania tally.

The Trump campaign predictably did not give up without a fight; lawsuits were filed in Pennsylvania, Michigan, and Georgia, laying the groundwork for contesting battleground states as he slipped behind the Democrat. The president then held a rambling news conference where he insisted without a shred of evidence that the election was rigged against him.

“If you count the legal votes, I easily win,” he announced without any shame or evidence. “The officials overseeing the counting in Pennsylvania and other key states are all part of a corrupt Democratic machine. We can’t let that happen to the United States of America.” Trump unleashed a similarly inaccurate tweetstorm on Saturday morning, with Twitter branding his rant as “disputed and misleading.”

Biden, who turns 78 later this month, unseated the one-term president after a tumultuous campaign featuring a raucous debate and his insistence on following COVID-19 protocols as Trump ignored science to hold huge outdoor rallies in the final days of the race. The former vice president and longtime senator led in the pre-Election Day polls, as did Democratic predecessor Hillary Clinton in 2016, but managed to win where she fell short.

Democratic presidential candidate former Vice President Joe Biden and his running mate Sen. Kamala Harris, D-Calif. (Andrew Harnik/)
The political veteran takes over a nation divided between Trump’s die-hard MAGA fans and Biden backers seeking a return to some degree of normalcy after four years of White House tweets, national protests, and a pandemic that killed 237,000 Americans. Another 9 million were infected, including the president and his wife.

Biden will become the nation’s oldest president in its history at his Jan. 20, 2021, inauguration. He was elected along with the nation’s first Black Vice President in California, Sen. Kamala Harris.

The septuagenarian, born in blue-collar Scranton, Pa., overcame the concerns about his age, holding his own in a pair of feisty one-on-one debates with Trump.

Trump doesn’t denounce white supremacy, says Proud Boys should “stand back and stand by” in debate 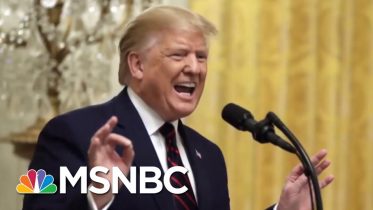 After Trump Decision, Turkey Launches Military Offensive In Syria – The Day That Was | MSNBC

Turkey launched airstrikes in northeastern Syria on Wednesday, prompting panic among civilians in the region and despair among fighters who have been crucial U.S….

Trump is a ‘poster child for a bad president’: Fmr. NAACP president

James Comey: There is a risk we’ve become so numb to the lying