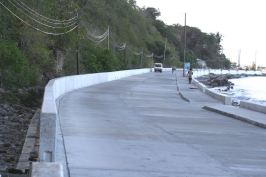 Roseau, Dominica – May 6, 2008……… Monday, May 5, 2008 marked three years since the General Election that returned the Dominica Labour Party, under the astute leadership of Prime Minister, Hon. Roosevelt Skerrit to power.

Despite the devastating impact of Hurricane Dean in August 2007, the inexorable rise in fuel prices and the economic slowdown in the United States and the other major industrialised countries, the Dominica government can point to a significant number of achievements in the last twelve months.

The highlights of the  last year include:

1.      Continued vigilance in the management of the public finances

3.      Dominica joined ALBA, an arrangement that will bring about significant benefits for the country in many areas. ALBA Bank recently capitalised with an initial sum of US$1 billion

4.      Government’s Housing Revolution  continued to impact the lives of  thousands of Dominicans across the country

5.      Work began on the construction of forty-one houses in the Carib Territory

8.      Government continued in its quest to build a knowledge-based economy with the commencement of the ICT Development Programme at a cost of $4 .4 million euros ($17 million ECD).

10. Progress made at the Melville Hall Airport with the completion of earth movement and river diversion and the transfer of customs and immigration to new section

11. First phase of Tax Reform programme has resulted in an additional 1036 persons no longer paying income tax.  Hundreds of taxpayers are now better off.

17. Completion of the Soufriere/Scotts Head Sea Defence project at a cost of $12 million

18. $22.3 million contract signed for the rehabilitation and upgrade of the Valley Roads

19. New bridge in Lagoon completed at a cost of $2.2 million

21. Work is continuing on the Tantan Sea Defense and associated works. Cost of the project is about $3 million.

23. Byak Road Slope stabilisation and works at Cabanis at a cost of some $3.5 million

27. Government’s thrust into the exploitation of Dominica’s geothermal energy resources boosted with the signing of Transnational Partnership Agreement with the French

28. Launch of a project entitled Preparation of a Geothermal-based Cross-Border Electrical Interconnection in the Caribbean at a cost of 4 million euros

29. New Type 3 Health Centre opened in Castle Bruce at a cost of $1.3 million

31. Phase II of the new Dominica Grammar School ongoing  at a cost of $3.5 million

33. An investment of $20 million in the agricultural sector in the short to medium-term

35. Successful completion of the Eco-Tourism Development Programme, funded by the European Commission and the Government of Dominica.

36. A record Two hundred and eighteen(218) nurses are currently being trained at various levels

38. Refurbishment of Psychiatric Unit of the Princess Margaret Hospital at a cost of about    $500,000 ECD.

The next twelve months will see even more benefits of government’s investments in the housing, agricultural, information and communication technology and tourism sectors.

Some major capital projects are also expected to begin in the course of the next twelve months. These include the first phase of the Canefield-Melville Hall Road, the Roseau Road Reinstatement Project and the West Coast Road.

Government recognises a difficult period ahead but remains confident that its policies will bring about greater levels of economic activity and higher living standards.

Be the first to comment on "LABOUR IN POWER: THIRD ANNIVERSARY SINCE MAY 5, 2005 GENERAL ELECTION"

Dem strategist Paul Begala On The 2020 Election: ‘Covid Has Changed Everything’ | Deadline | MSNBC

Democratic strategists Paul Begala and James Carville discuss what is going to matter to voters amid the coronavirus pandemic. Aired on 8/7/2020. » Subscribe…