In partial footage obtained by the Daily Mail from the body cameras worn by two of the now-former Minneapolis police officers involved in the arrest of George Floyd, a panicked Floyd can be seen struggling with officers while in the back of a squad car in the minutes before his death, saying, "I can't breathe."
Moments later, following the struggle, Officer Thomas Lane can be heard asking Officer Derek Chauvin whether Floyd should be rolled on his side.
Floyd died May 25 while in custody, and the incident — which was also recorded on cell phone video — set off protests that soon went nationwide. The demonstrations over his killing and the deaths of other African Americans at the hands of police prompted intense discussions on racism in America.
The Daily Mail, based in London, does not say how it obtained the footage of the police body cameras. 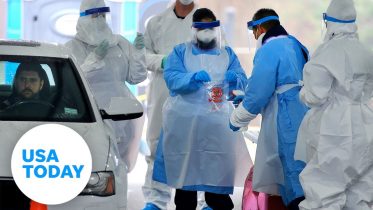 In Stunning Upset, Democrat Beshear Is Apparent Winner In KY Governor Race – Day That Was | MSNBC