We were saddened to read Friday of the death, at 88, of Regis Philbin, from whom we learned a humbling lesson most enjoyably. Philbin was then hosting “Live! With Regis and Kelly.” We were not a regular viewer. Technically speaking, we might not have heard of him, though we’re now embarrassed to admit it. All we can say for ourselves is that we’d barely discovered electricity and were still scrawling out our editorials with a dip pen.

One day we arrived at the newsroom to be met by a secretary, who exclaimed that the Sun had just been held up on television by Regis Philbin. “Who?” we said. After she explained, she advised that the event was “huge.” It would be too much to say that it became a regular occurrence on “Live!” But it would not be too much to say that Philbin must have been a regular reader of the Sun, for he occasionally held up a headline he liked.

That was no small thing for a startup daily in the big city. So we sent him a letter thanking him and asking whether he might join us for breakfast so that we could express our appreciation in person. A day or so later, to our surprise, an aide of his called to say that he’d be delighted. A date was fixed at the Harvard Club, which lays a particularly nice breakfast beneath high windows that bring in the morning light.

Philbin was right on time, and we had a jolly repast. He evinced a sense of enthusiasm and wonderment and asked the majority of the questions. It quickly became apparent what a master he was of his craft. What we most recall of the encounter, though, is the contrast between our breakfast with Philbin and our meals with scores of other newsworthy or famous figures, dining with whom is a feature of the newspaper life.

The veteran waiters in that wonderful dining room are accustomed to this kind of thing. Nothing seems to faze them. Over the years we’ve broken bread there with such newsworthy figures as, say, Henry Kissinger or Ariel Sharon or Ray Kelly or the ex-president of South Korea, Kim Dae Jung, or Ed Koch or the particularly memorable prime minister of Dominica, Eugenia Charles. Not once did a waiter cock an eyebrow or express any sign of excitement.

Except with Regis Philbin. No sooner was he out the door than people started coming up to us to express delight and awe at seeing Philbin. This went on for weeks. “I heard you had breakfast with Regis,” one would say. Or, “How did you meet him?” Or, “I’ve watched him for years.” It turns out that Philbin had already entered the Guinness record book as having spent more television time on air than any other person ever. It was no accident. He had a spark that people loved.

Chris Hayes: Trump Is Worried Coronavirus Will Be Bad For His Re-Election | All In | MSNBC

How the internet changes the impeachment debate

Bob Woodward: We now have a constitutional problem 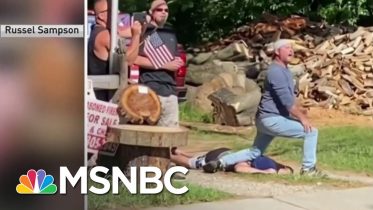 After white men mocked the death of George Floyd during an earlier march, more demonstrators have shown up in Franklinville, New Jersey to voice…

Biden At JusticeCon: Americans Have ‘Duty To Act’ To ‘Dismantle Systemic Racism’ | MSNBC