It has been brought to the attention of the Ministry  of   Foreign   Affairs  of  the Commonwealth of  Dominica  that  over  the  past  few  days, many  negative comments are being promulgated with respect  to the  character and integrity of an Ambassador Designate of Dominica to the Food and Agricultural Organization, FAO.

The facts are that this proposed appointment was guided by standard policy as it relates to the selection of both nationals and non-nationals willing to serve and represent Dominica in an Honorary capacity in Honorary Consulates, Missions and Trade and Investment Offices in strategic capitals, or as Non Resident Ambassadors.

Following a Cabinet Decision of June  2011, Government agreed  to strengthen Dominica’s presence at the United Nations Food and Agriculture Organization, FAO. By letter dated June  21 2011, the Ministry of  Foreign   Affairs sought the  approval of the FAO for  the appointment of Mr. Francesco Corallo as Permanent Representative of Dominica to the FAO. Recognizing the strategic importance of the FAO to Dominica, Cabinet  has also advised that a suitably  qualified technical Official  from Headquarters form part of the staffing of the Mission.  The Ministry is still awaiting formal communication from the FAO, so as proceed

Under the Headquarters Agreement with the Government of Italy, the  FAO is required to clear all appointments with the relevant Government Authority in Italy. Through discussions with the FAO, Dominica’s Ministry of Foreign Affairs was assured that the process was cleared in principle and that a date was being finalized for the presentation of credentials to the  Director General. In order to facilitate the process the FAO, requested copies of Mr. Corallo’s CV, information on the location of the Mission and the first two pages of his diplomatic passport. A letter was also issued by the Ministry of Interior of Italy, as evidence that Mr. Corallo was sufficiently cleared by that Ministry.

In keeping with the letter and  spirit of the Vienna Convention on Diplomatic relations, Internal relations practices and the  request from FAO, official documentation were issued to Mr. Corallo to facilitate the presentation of credentials to the Director General of FAO and to treat with the Authorities in Italy in the actual establishment of the Permanent Mission.

The procedure for  formalizing such appointments is standard International relations Policy and  practice.   The sending  State  having  identified an  individual, conducts background checks.  Thereafter, and  consistent with International Laws  and  practice, the  process  of appointment is then triggered as follows;

-Government then communicates to the organization or the state seeking agreement for the said appointment. The agreement of the receiving State and or the  Organization is extremely important to the  process  as it allows for  another phase  of  due  diligence which is this  time  conducted by the  respective state or organization.

-The  receiving State or Organization then has to communicate its approval or objection of the said appointment.

This process of appointing Ambassadors, Consul Generals, Honorary Consuls and Permanent Representatives to international Organizations is transparent and involves not just Dominica but the  receiving State and or Organization. All activities are governed by well  established conventions, agreements and internationally accepted norms  and practices. Any abuse can easily be identified and  address by all parties under clear provisions of  International law spanning several  decades.  Dominica   has always acted within the remit of International Conventions and intends to continue with its track  record of Transparency, Respect for the Rule of Law and  Sovereignty of all  States and  Good  Governance for which it is well recognized by the international community. 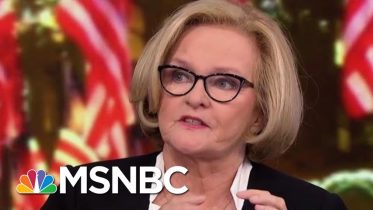 Former Sen. Claire McCaskill and Joy Reid join Brian Williams and Nicolle Wallace and provide analysis on how Julian Castro did himself a disservice…

Trump Still Insists ‘Anyone’ Can Get Tested For Coronavirus; It’s Not True. | The Last Word | MSNBC

Chris Hayes: Trump Will Try To Lie To You About The Death Toll | All In | MSNBC