About MTP Daily with Chuck Todd: Bringing the insight and power of “Meet the Press” to MSNBC every weekday, Chuck Todd looks at the key stories of the day with political newsmakers as they break down and analyze the issues facing U.S. and world leaders. The program features hard-hitting interviews – a hallmark of Todd’s Sunday program – in addition to signature segments such as “I’m Obsessed With,” which highlights topics about which Todd is especially passionate. With an acute understanding of the inner workings of Washington, Todd explains how complex policy issues affect all Americans.

Mara Gay: America Is At ‘A Very Scary Moment’ In Its History | The 11th Hour | MSNBC 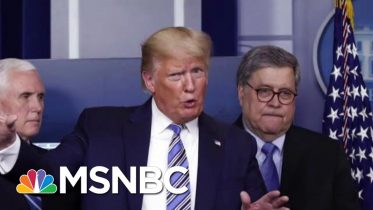 The United States has reached a grim milestone as the number of deaths linked to coronavirus passed 1,000 in the country on Thursday, according…

Michigan Sec. Of State Speaks Out Against Inaccurate Claims About Mail-In Voting | MSNBC

Toronto announces more closures, calls on residents who have travelled to self-isolate