The opposition United Workers Party (UWP) executive has condemned the acts of violence and vandalism that erupted in the streets of Dominica’s capital, Roseau, earlier this week.

Leader of the opposition Lennox Linton rejected claims from the Dominica Labour Party (DLP) government that the violence began because of a public meeting held by the UWP on Tuesday, CBN4 reported.

Meanwhile, the chairman of the Caribbean Community (CARICOM), Guyana’s President David Granger, expressed concern over the violence in Dominica.

“CARICOM recognizes the right of citizens to engage in peaceful protest. However, the Community condemns the vandalism that resulted in the destruction of private property and businesses,” Granger said in a statement.

The Community urged all to act with restraint and maintain the orderly and peaceful society to which Dominicans and the wider Community are accustomed.

Linton stated that the public meeting was in compliance with the constitution of Dominica.

“The peaceful non-violent assembling of patriots was conducted according to the laws of the Commonwealth of Dominica and concluded without any adverse incidents whatsoever,” he insisted.

“The United Workers Party condemns the acts of violence and vandalism that erupted in the streets of Roseau during the evening of February 7, 2017, causing widespread loss and damages to business enterprises and triggering fears for safety and security in heightened tensions in our practice of civility,” he added.

Linton expressed sympathy to persons who were in one way or another affected by the acts of violence.

“As the events unfolded the leadership of the United Party was being blamed on the grounds that the disorder resulted from a public meeting calling for the resignation of Roosevelt Skerrit as prime minister. We say to you today both events are unrelated and we condemn these baseless criticisms as forcefully as we condemn the lawlessness visited on the capital city Tuesday night,” he continued.

Linton called on the individuals who used the meeting as an opportunity to embarrass the UWP to speak the truth about what transpired.

“Those who saw and used the meeting as cover to engineer this order and destruction to embarrass the United Workers Party, just as Mr Skerrit and company have been doing over the past 24 hours know themselves and owe it to a deeply concerned nation to speak the truth… because that is precisely what will set us free,” he said.

Be the first to comment on "Opposition condemns violence in Dominica" 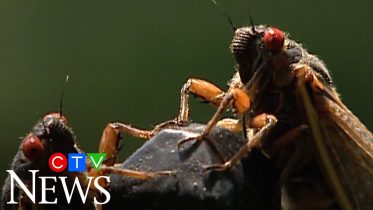 Millions of cicadas expected to emerge from underground

After 17 years underground, millions of cicadas are expected to emerge from the soil in the U.S., which could affect trees and vines. Read…

‘He was remarkably influential’: Little Richard dead at 87