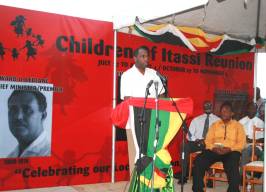 Roseau, Dominica – August 11, 2008……… Prime Minister and Parliamentary Representative for the Vieille Case constituency, Hon. Roosevelt Skerrit has announced scholarships in the name of the man widely regarded as the Father of the Nation- Mr. Edward Oliver Leblanc.

The Prime Minister made the announcement at the official opening ceremony for the Children of Itassi Reunion 2008 in Vieille Case recently.

According to Hon. Skerrit, a national scholarship in the name of Edward Oliver Leblanc will be awarded to a Dominican every four years to attend a university, subject to the recipient’s involvement in community work such as active participation in church, sport and other activities.

In addition, effective September, 2008, two scholarships will be awarded annually in the name of EO Leblanc to two Dominicans to attend a secondary school. The scholarship recipients must also be involved in some form of community work.

He was given a State Funeral by the Government of Dominica on November 6, 2004.

Twitter temporarily suspended the account owned by Donald Trump, Jr. for violating their rules after he shared a video promoting the controversial and unproven…