Roseau, Dominica – July 15, 2010……….. In his 2010-2011 Budget Address, Prime Minister and Minister for Finance, Hon. Roosevelt Skerrit revealed that the fiscal out-turn for the last fiscal year, 2009-2010, reflects his “Government’s commitment to prudent macro-economic management and  stability”.

Even as all the economies of the Eastern Caribbean Currency Union continue to grapple with the spill-over effects of the current global financial crisis, the Dominica government can point to favourable economic indicators.

For the 2009-2010 fiscal year, “current revenues are estimated to have outperformed projections by $4.6 million or 1.3 percent. Value Added Tax exceeded estimates by $4.1 million reflecting in part some economic activity and government’s continued effort in implementing an accelerated capital programme”.

The estimated actual capital expenditure for the year ended 2009-2010 was 16 percent of GDP. Of this total, 71 percent was financed through grants, 24 percent local financing and 5 percent loans.

“All in all, Madam Speaker, Government’s main fiscal indicator, the primary fiscal balance, recorded a surplus of 1.5 of GDP, short of the 2 percent that had been estimated. The main reason for this would be the non-implementation  of the measures for capital revenue  which accounts for more than 1 percent of GDP and the higher than projected level of government financing of the capital budget,” Prime Minister Skerrit stated.

“Madam Speaker, in terms of the fiscal year 2009-2010, I can report that our debt to GDP ratio now stands at 72 percent. I believe Madam Speaker that it bears reminding that this represents a climb down from 130 percent which is where the ratio stood in 2003. It is this performance that has helped to increase Government’s flexibility to respond to economic shocks and to maintain capital spending in 2009 at the high post-hurricane levels of 2007 and 2008,” Prime Minister Skerrit told Parliament.

“Yet another reflection  of the improved health of the public finances is that the ratio of interest payments to recurrent revenue for 2009/2010 is estimated at 5 percent and total debt service(interest and amortisation) is estimated at 12 percent,”  Prime Minister Skerrit stated.

The Prime Minister in his address pointed to the economic management policy goals of his Government as reflected in the Growth and Social Protection Strategy: 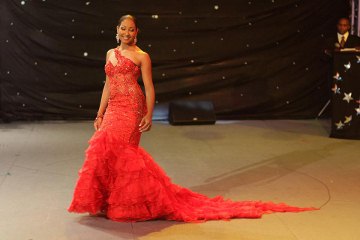 Miss. Dominica Nadira Lando has captured the crown as the 2012 Jaycees Caribbean Queen, in the 51st year of the pageant. In an evening dubbed…