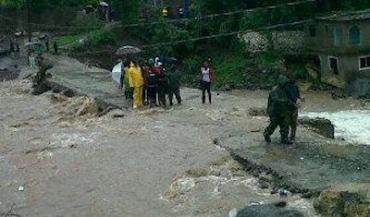 BRIDGETOWN, Barbados, Friday October 26, 2012 – Hurricane Sandy batters the Bahamas as a slightly weakened category one hurricane after causing several deaths and widespread damage in the Caribbean.

According to reports from the Washington Post, Sandy was responsible for the deaths of at least 29 people, with 11 reported dead in Cuba, one in Jamaica, 16 in Haiti and another in the Bahamas who was preparing for the storm.

Widespread power cuts were reported in Jamaica and the Bahamas and Cuba suffered heavy crop damage due to heavy rains and flooding.

On Friday morning the National Hurricane Center (NHC) 11am ET report indicated Hurricane Sandy was located at 26.7N 76.9W or 25 miles north-northeast of Great Abaco Island in the Bahamas and is moving north at 6 miles per hour. A hurricane warning remains in effect for the northwestern Bahamas.

According to the NHC report, wind speed has dropped to 80 miles per hour as Sandy has weakedened to a category one hurricaner however the storm is expected to remain at hurricane strength as it reaches the US east coast near to Washington D.C. early next week.

Forecasters indicate there is also the possibility Hurricane Sandy could become a “super-storm” if it crosses paths with a winter storm before crossing the US east coast.

Be the first to comment on "Rampaging Sandy leaves a trail of death, destruction across the Caribbean"

Roseau, Dominica – Thursday, December 2, 2014 – The Government of Dominica has received the second fixed tranche of funds under an 8.46 million euro…

The link between the spread of COVID-19 and increased gun sales.