BRIDGETOWN, Barbados, 15 February, 2018 –   The catastrophic hurricanes that devastated some Caribbean destination last September slowed down tourism’s progress but did not stop it, according to figures released by the Caribbean Tourism Organization (CTO), the authority on regional tourism statistics.

Ryan Skeete, the CTO’s acting director of research announced at a news conference streamed to a global audience that the Caribbean reached the 30 million mark in stay-over arrivals for the first time ever last year, even as the region battled the effects of hurricanes Irma and Maria, as well as Hurricane Harvey, which lashed parts of the United States, the Caribbean’s primary market.

In addition there was record spend by visitors, who contributed US$37 billion to Caribbean economies during the 12-month period, up 2.6 per cent over 2016, Skeete reported.

The tourism researcher explained that stay-over arrivals were on track for a strong performance during the first-half of 2017, growing by an estimated 4.8 per cent, but growth was curtailed in the second half of the year by the storms, which were largely responsible for a1.7 per cent drop between July and December.

“These outcomes resulted in an overall increase of 1.7 per cent in 2017, making it the eighth consecutive year of growth, albeit slower than the average global growth rate of 6.7 per cent.

The CTO official explained that strong economic performance in the main markets helped spur the region’s performance, with some destinations recording strong double-digit growth, although the hurricane-affected countries were down between seven per cent and 18 per cent.

The United States continued to be the primary market, growing by about 0.5 per cent to reach an estimated 14.9 million visits to the region due mainly to solid economic growth, low unemployment and high consumer confidence; while the Canadian market rebounded strongly, recording a 4.3 per cent increase in arrivals, compared to a decline of 3.1 per cent in 2016.

However, it was the European market that recorded the strongest growth rate, increasing by 6.2 per cent to 5.8 million visitors, with the United Kingdom up by 2.9 per cent to 1.3 million.

The increase in arrivals was not reflected in hotel occupancy, which fell by 1.2 per cent, according to STR (formerly Smith Travel Research), a U.S. company that tracks supply and demand data for the hotel industry. However, both average daily rate and revenue per available room recorded increases, though slightly.

“Notably, the hotel performance indicators excluded most of the hurricane-impacted destinations at this time, due to the disruption in operations caused by the hurricanes,” Skeete said.

The cruise sector also set a new high of 27 million passengers, 2.4 per cent higher than 2016, despite the hurricanes.

“The cruise passenger performance mirrors the performance of tourist arrivals, as it grew strongly by 4.6 per cent  in the first half of 2017, but contracted marginally  – by 0.4 per cent – in the second half of the year. Indeed, cruise passenger arrivals fell dramatically in September by some 20 per cent. However, growth resumed in October, which saw a two per cent increase,” the CTO official said.

The CTO said the economic conditions are expected to be favourable for further growth in 2018, therefore it predicts growth of two to three per cent in both stay-over and cruise arrivals. 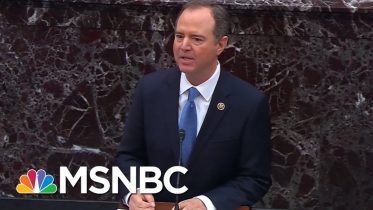 Catch up on MSNBC's Thursday night analysis of the second day of Democrats' opening arguments in the Senate impeachment trial of President Trump. Aired…