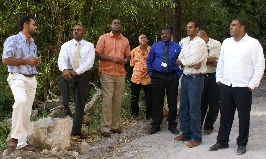 Roseau, Dominica– April 26, 2010…… Residents of the community of Laudat converged at the Laudat Government School last Wednesday evening for a discussion on the status of works on the Laudat section of the Valley Roads project better known as the Road Improvement and Maintenance Project (RIMP).

The Road Improvement and Maintenance Project, valued at over EC$22 million is behind schedule.

In his remarks to the villagers, Chief Technical Officer, Mr. Kendell Johnson explained that a number of factors have contributed to the delays on the project.

“We are very late or delayed because of several reasons. The original scope of the project did not envisage that amount of excavation and road works. As a result the extra works needed more time to be done. Critically for the Laudat section though was the incident of a slide close to Trafalgar-Laudat junction. Because of that incident heavy equipment could not be transported towards Laudat, thus slowing down the pace of works. As a result that end suffered some delays,” Mr Johnson stated.

The CTO also cited what he referred to as “the apparent slowness of the contractor” as another reason for the delays. The inability by the contractor to get sufficiently and adequately skilled local labour and more equipment and resources to do the works also contributed in some measure to the delays, Johnson confirmed.

In spite of these difficulties, Mr Johnson referred to a “fair amount of mobilisation now taking place in Laudat ” and expressed optimism for  the success of the project going forward.

In response to several questions from villagers, representative of the contractor, Mr. Ian Singh gave the commitment that his company would finish the Laudat section of the project by July 15th 2010.

Mr. Singh stated all that remains to be done is “surfacing of the road, further safety work and the building of four more culverts”.

At the end of the meeting, Permanent Secretary, Nicholas Bruno commended the people of Laudat for their patience during the execution of the project. Mr Bruno also pledged to continue to work with the contractor and the consultants to ensure the speedy completion of the project.

Prior to the meeting with the residents of Laudat, Prime Minster, Hon. Roosevelt Skerrit and Minister for Public Works, Hon. Rayburn Blackmoore walked certain sections of the Laudat road to get a fuller appreciation of the status of works on the Laudat component of the project. They were joined by officials from the Ministry of Public Works, Mr. Ian Singh from Dipcon Engineering , Mr. Jean Guy Bandville of  Dessau International and Mr. Aaron Rolle from the Laudat Improvement Committee.