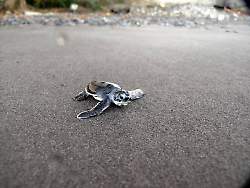 LOS ANGELES, California – Green Globe member the Rosalie Bay Resort, located on Dominica in the Caribbean, is one the world’s best ethical destinations. This eco-resort is a pioneer on Dominica when it comes to the environment. Rosalie Bay’s owner, Beverly Deikel, partnered with WIDECAST and other organizations to establish a sea turtle conservation program on Dominica.

The Rosalie Sea Turtle Initiative engages locals and guest in opportunities to help in the recovery of sea turtles on the island and throughout the Caribbean. The program includes night patrol during nesting season, clean up on nesting beaches, education programs and data collection. In 2003 there were only seven leatherback nests. By 2010 there were 69 nests of three species of sea turtles: leatherback, hawksbill and green – and a 100% survival with all nesting species protected.

Rosalie Bay Resort owner, Beverly Deikel, has been featured in the latest episode of the EX-PATS video series, entitled “Baby Turtles in Dominica from Grandbabies in Minneapolis.” The former Minnesota native moved to Dominica more than 10 years ago, and now calls the Caribbean island home.

In the 20-minute episode, host Savannah Jane Buffet travels to Dominica and joins Beverly Deikel at Rosalie Bay Resort. The episode, which is available for on-demand viewing on YouTube, shares Beverly’s inspiring journey to the Nature Island, leaving behind her children and grandchildren in Minnesota to create Rosalie Bay Resort, save the endangered sea turtles and find love.

In addition to Rosalie Bay Resort, the EX-PATS episode showcases many other locations on Dominica. Savannah and Beverly spent time at Trafalgar Falls, set sail on a catamaran to view stunning coastal views of the island, met with Simon George, President of the Nature Enhancement Team (NET) at Rosalie Bay, and had the incredible opportunity to witness baby green sea turtles emerge from the nest and venture out to sea. One of Beverly’s daughters and her close friend were also interviewed and featured in the show.

“It has been an incredible honor to be selected by Travel + Leisure and included in the EX-PATS show,” said Beverly Deikel, Owner of Rosalie Bay Resort. “The unsurpassed natural beauty of Dominica first captured my attention, but it is the people and the sea turtles that have captured my heart. I hope this show inspires more people to visit the Nature Island and follow their dreams.”

The EX-PATS episode first aired on May 9, 2013. Since then more than 1,000 people and counting have viewed the video.

EX-PATS is a video series that airs on the Reserve Channel on YouTube. The series is in cooperation with Travel + Leisure magazine and profiles ex-patriots who made the leap to move to another country. The episode was filmed in October 2012.

Piecing Together The Moments Before Floyd’s Death | MSNBC

‘They Will Be Charged’: Floyd’s Family Lawyer Expects Other Officers Involved In Death To Be Charged