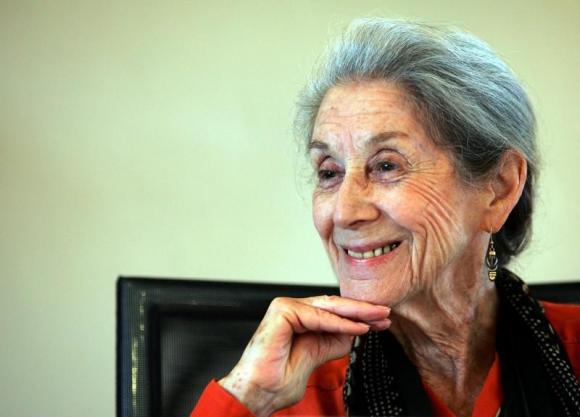 South African Nobel Prize-winning author Nadine Gordimer, one of the literary world’s most powerful voices against apartheid, has died at the age of 90, her family has said.

Gordimer died peacefully in her sleep at her Johannesburg home on Sunday evening in the presence of her children, Hugo and Oriane, a statement from the family said on Monday.

Over the last 60 years, Gordimer has produced dozens of novels, essays and plays, many of which were critical of the racist apartheid system, which lasted from 1948 until 1994, in South Africa.

She was awarded the Nobel Prize for Literature in 1991. “Her magnificent epic writing,” said the citation, “has been of very great benefit to humanity.”

She became a member of the African National Congress when the movement, which became the country’s post-apartheid ruling party, was outlawed and though many of her works were banned, she did not stop writing and continued to provide a voice for victims of the apartheid.

In an interview with Al Jazeera conducted two years ago, Gordimer said: “One of the key things is that those of us who were in the struggle at the peak of it all, were totally concentrating on getting rid of the apartheid, on defeating the regime.”

“We did not have the time to think about what we would have to face afterwards.”

Why Elizabeth Warren is surging in the polls

Author Minda Harts joins Morning Joe to discuss her book 'The Memo: What Women of Color Need to Know to Secure a Seat at…

Dem Guru On Getting Tough With Trump: ‘Get A Diaper Or Get To Work’ | MSNBC

Doll gets more diverse, but what damage did she do to previous generations?