Stakeholders In The Banana Industry Sign Memorandum Of Understanding 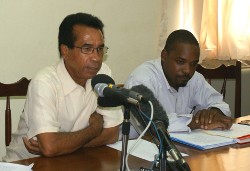 Roseau, Dominica – October 16, 2009……. An initiative by the Ministry of Agriculture, Fisheries and Forestry, led by the Minister for Agriculture, Hon. Matthew Walter, to avert a collapse of the banana industry in Dominica, has resulted in the signing of a Memorandum of Understanding between the Dominica Banana Producers Limited (DBPL) and the Dominica National Fairtrade Organisation (DNFTO).

At a news conference convened to reveal details of the MOU, remarks were delivered by representatives of stakeholders in the banana industry. These included the Minister for Agriculture, Hon. Matthew Walter, Chairman of the DBPL, Mr. Luke Prevost, Business Manager of DNFTO, Mr. Davidson Lloyd and Mr. Bernard Cornibert, CEO of WINFRESH, formerly WIBDECO. Chairman of the Banana Industry Trust (BIT) Mr. Elford Henry, was also present.

Since the DNTFO became signatories to a Sales and Purchase agreement with the Windward Islands Banana Development and Exporting Company (WIBDECO) in March 2008 for the export of bananas from Dominica to the United Kingdom, the industry in Dominica has suffered from fragmentation leading to further declines both in the number of Fairtrade farmers and volumes being shipped to the UK.

The purpose of the MOU signed earlier this week is to guide and develop a framework for collaboration between the DNFTO and the DBPL that is mutually beneficial to both entities, and ensures the continued survival of the banana industry in Dominica. The collaborative effort aims to eliminate unnecessary competition, reduce wastage and duplication and to secure affordable prices for production inputs and packaging materials for banana growers.

The MOU states areas of collaboration between the two parties. These include: Input Cess Transactions; Leafspot Control; Procurement of production inputs and Procurement of packaging materials.

The Memorandum of Understanding further states “the agreement will become effective on the date of signature of all parties and shall be enforced for a period of twelve(12) months thereafter to be renewed upon satisfactory performance of the obligations of both parties”.

In his remarks at the news conference on Wednesday, Minister for Agriculture, Hon. Matthew Walter pledged his Government’s continued commitment to the success of the banana industry in Dominica and the agricultural sector as a whole.

The Minister added that in addition to the implementation of the terms of the MOU by the parties, Government would do the following:

The signing of the MOU between the DBPL and the DNFTO represents the culmination of discussions engineered by the Minister for Agriculture, Hon. Matthew Walter and other officials within his Ministry to bring the two parties to the table.

After two joint meetings involving the parties organised by the Ministry of Agriculture, Fisheries and Forestry, a technical task force was constituted to review the state of the industry and make appropriate recommendations for the general improvement of the industry. One of the primary objectives of the task force was to foster greater collaboration among stakeholder organizations and companies of the Banana Industry through informed discussion and negotiations.

At their last meeting on June 23, 2009, a decision was taken by the parties to draw up a Memorandum of Understanding to guide the process of collaboration between them. 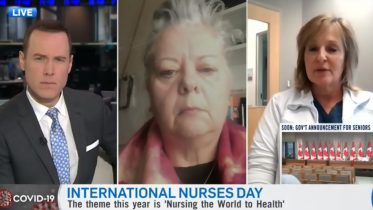 Nurses on the challenges facing them

On International Nurses Day, two Canadian nurses opened up about the challenges they are facing working on the front lines during this pandemic. Read…

Whitehouse Out of CONCACAF League – November 6 2020

Andrew Yang: This is what voters are telling me about impeachment