THE FUSS IS GOOD

With all of the nuances that underlie litigation, Antiguans and Barbudans followed the election dispute case to its final appeal. On last Wednesday, the United Progressive People government won the case in the shadow of decline and on the brink of the nation’s 29th birthday.

I have seen too many governments fall apart at the point where success should have revived them. They publicly implored because they disregarded public opinion. When that ugly day of discovery came, pompous leaders slipped into oblivion, wrecked by miscalculation.

Instead of promoting healing words and fighting gestures, the government should avoid chest-beating celebrations and focus on innovative social and economic solutions.

For the opposition, outbursts of anger are embellished by the prospect that change will have to wait for three more years.  The need to rebuild trust bonds between leaders and the people should be part of the way forward.  Active listening builds trust capital.

In the unfolding human drama of the Eastern Caribbean Court of Appeal’s decision, when some protested that the government’s victory was the people’s loss, it was thought that they were eccentric. Worse, they were seen as creating social upheaval.

Yet, the very nature of interpreting the law involves contested interpretations. It can be argued that rival interpretations emerge from the constraints under which judges must operate to determine what ought to be done.

To satisfy the public’s interest—comprising of different intellectual textures and sources of intrigue— I want to encourage a therapeutic process of ventilation. The people need to come to terms with how the interpretation of the law, fits into the larger context of legal reasoning especially since there are gaps in the law.

It is not true that bathing on the beach of misleading courtesy is acceptable as long as you don’t swim out too far into the dangerous waters of public disagreements.  Visible emotions represent an animated public trying to make sense of the role of legal reasoning and interpretation in shaping the practices of democracy, and yet, strangely, no one pointed out this irony.

While windswept tension indicates a nation bleeding over the final judgment rendered by the Eastern Caribbean Court of Appeal, the equation of intolerance with dissecting voices is undertaken on behalf of some unspoken agenda. Marginal voices concerned with whether the decision conformed to ethical standards worthy of the Golden Rule should not be dismissed.

Recall that some think that the public has a right to argue. Yet they pour scorn on the people’s capacity to judge the judges.  From their perspective, most persons in society do not have the tools to think accurately about standards of evidence or the deeper purposes of the law. It stands to reason that the task of interpretation must be left to those whose duties are to evaluate legal criteria.

Just as vigorously, another school of thought espouses that those who interpret the law must do so in relation to its social consequences and with sensitivity to the public’s opinion. They argue that virtues of mutual respectability cannot be cast aside or made the targets of calculated mockery.

It is gratifying that citizens and residents of Antigua and Barbuda are rowing out under the cliffs of maturity in support of rigorous debates. As long as our collective wills do not will what is destructive, our fussing is good.  It has the potential to deepen understanding.

I do not want us to think that social disputes are finally settled simply because the Eastern Caribbean Court of Appeal rendered its final decision.  This naivety proves nothing.  What matters most is the people’s recognition that they have a role to play in ironing out the secular credo of liberty, which the Court has a duty to protect.

As I write, frustrated voices are sounding the alarm that the government is now free to implement its bitter social medicine, which will bring havoc to the poorest in the society. I suspect that these voices are more concerned with raw criticism than they are with having nation-building causes worth defending.  The practice of freedom makes it possible to express this viewpoint.

Judges and the people

One function of a progressive society is its capacity to judge whether the interpretation of the law by judges was correct or incorrect. This space for dialogue and counter dialogue should showcase refinement and resists rudeness. It should also be self-evidently funny.

In relation to the social practice of the law, it is difficult to defend one right interpretation. Judges do not have a universal step by step process to arrive at a one-size-fit-all framework of decision- making.  Yet, I affirm that interpreting the law, contain some degree of ethical integrity, insofar as it forces judges to struggle over the deepest commitment of the spirit of the law, whether using case precedent or agreeing on the general social principle behind the intent of the law.

When judges exercise reverence for the will of the people within their broad discretion of interpreting the law, they communicate to the public that the ideals of democracy are sacred. Such an attitude can go a long way to squelch personal and communal violence and to invite widespread acceptance of their decisions.

The public must recite the truth while embracing all of its emotions in deciding the content of the common good. One priority is to analyze what are the critical issues before the judges. There must be opportunities to decipher:  What important social values are in violation, if any? And which values are most important vs which ones are in conflict.

First, the criteria to accept elections results is that, as long as constitutional breaches and electoral irregularities are made in the scope of human errors, they must be accepted as unobjectionable and must serve to ratify the people’s will.  I am skeptical that this standard won’t lead to perverse incentives.  It’s quite possible that political operatives could wink and nod at practices that reasonably violate electoral laws, as long as convincing margins of victories can be predicted.

Second, up for critical scrutiny is whether judges always have the luxury to decide on a case by merely relying on the existing law. They should have the freedom of filling in the blanks when the rules run out.  If the latter is true, what role does innovation plays in the interpretative process?

Third, adherence to constitutional rules and electoral protocols is meant to be regarded. But the Eastern Caribbean Court of Appeal rejected this logic. It noted that compliance is only some evidence which should be considered in determining whether to void elections or not.  This idea contains a sliver of novelty. I wonder what degree of electoral imperfection is unfit for constitutional intended purposes. Of course, to leave this issue unspecified so that one could reasonably accept unequal elections outcomes as fair and free, leaves us with limited ability to formulate the relevance of adherence.

Fourth, it is clear that the definition of the bar of adherence is a burden created by the Eastern Caribbean Court of Appeal’s ruling rather than by those implementing electoral processes. There must be some sort of agreement, whether implicit or explicit, because compliance to the law is designed to benefit us all. If an electoral process was discovered to be unfair and unfree, adherence as an ethical end in itself is a reasonable criterion to void elections results. But I am aware that what is ethical and what is legal may not always dance on the same floor.

The eminent judges concluded that constitutional breaches do not subvert obvious electoral misconduct, if the evidence proves that outcomes would remain the same.  I think in the balancing act of “imperfect adherence,” the process and the result must cohere in the name of justice.

With all things being equal, spectacular incompetence which may lead to a soiled election, does not in itself prove an illegal conspiracy. Nor does it prove an automatic disadvantage for those vying for the people’s votes.  Given the complexity of the challenges of freedom, even an outrageous fuss is an admirable idea.  Let the fuss linger as important lessons are learnt. Let it run its course for the sake of greater operational efficiencies.

But as a family torn by reconcilable disputes, let us pause long enough to embody our 29th Independence Day theme: “Antigua and Barbuda: One family, celebrating our Youth.” Perhaps we can match youth-talk with real opportunities for our people to become effective leaders,  operate successful businesses, explore intellectual ambitions, exhibit personal resilience, develop moral fortitude and cultivate cultural pride. How we live as adults sets the example for the next generation to fulfill its sense of purpose, imagination and destiny.

Dr. Isaac Newton is an International Leadership and Change Management Consultant and Political Adviser. He specializes in Government and Business Relations, and Sustainable Development Projects. Dr. Newton works extensively, in West Africa, the Caribbean and Latin America and is a graduate of Oakwood College, Harvard, Princeton and Columbia. He has published several books on personal development and written many articles on economics, education, leadership, political, social, and faith based issues.

Be the first to comment on "The Fuss Is Good" 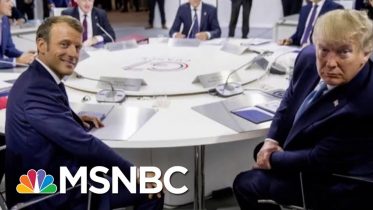 Rep. Reed: Trump’s Actions Don’t Rise To Level Of Impeachment | All In | MSNBC