President Donald Trump conceded publicly for the first time that he will not serve a second term, stopping short of congratulating President-elect Joe Biden but acknowledging a transfer of power is now underway.
It appeared to end, for now, Trump's false and corrosive attempt to overthrow the election results, which culminated in a violent attempt at insurrection at the US Capitol a day earlier. It did not reckon with Trump's role in fomenting that violence, nor did it contain a vow to change his behavior.
But with 13 days until Biden is inaugurated, the President's comments in a prerecorded video amounted to as much of a concession as he is likely to offer before he departs the White House for good.
"A new administration will be inaugurated on January 20," Trump said in the video, which was taped at the White House. "My focus now turns to ensuring a smooth, orderly and seamless transition of power."
A White House adviser in discussions with senior officials said Trump recorded the video only because his presidency is threatened by looming resignations and potential impeachment.
"I think that video was done only because almost all his senior staff was about to resign, and impeachment is imminent," the adviser said. 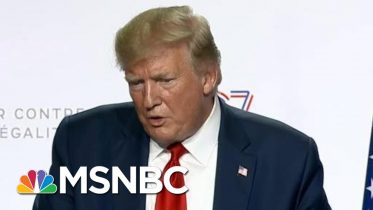 MSNBC's Hallie Jackson questions President Donald Trump on the ethics of holding next year's G-7 summit at his golf resort in Miami. » Subscribe…

White House: Trump will not cooperate with impeachment probe