President Donald Trump said he will "surge" federal law enforcement officers to Chicago and Albuquerque, despite resistance from local leaders, as he adopts a hardline "law and order" mantle ahead of November's election.
In making the move, Trump is wading further into an effort to portray Democrats as weak on crime and unable to protect the citizens of places where they are in charge. He has ordered federal agents to tamp down on protests in Portland, Oregon, leading to chaotic tableaux and reports of unmarked vehicles snatching people off the streets. And he has warned he may order federal officers into other states and cities he deems insufficiently policed, even if governors and mayors in those places don't ask for help.
His attention in recent days has focused on Chicago, whose Democratic mayor said Tuesday she would not allow "Donald Trump's troops" into her city. Before he became president, Trump once railed against his predecessor for high crime rates in Chicago, but he now blames local officials for the scourge.
Using ominous rhetoric and dark language to describe cities run by Democrats as rife with crime and violence, Trump suggested Wednesday he had little option but to take steps those leaders haven't to save innocent lives.

Presidential Historian: ‘Trump Is So Terrible He Makes Hoover Look Like Gandhi’ | All In | MSNBC 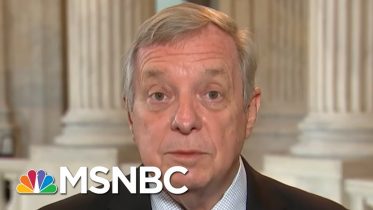 Senate Democrats on Wednesday blocked Republicans from taking up a bill to overhaul policing, calling the legislation flawed and a nonstarter. Sen. Dick Durbin,…

‘So shameful’: Chalian reacts to Trump’s comments on John Lewis