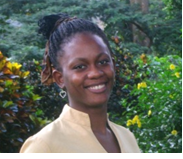 Roseau, Dominica– Ms. Aaronia Stedman and Ms. Elora Riley, students of the University of the West Indies (UWI) Open Campus Dominica, have been awarded the UWI Canadian Gala Bursaries valued at CAN$3,000 for the academic year 2012-2013. Stedman, a BSc Management Studies major, who is the current Deputy Chair of the Dominica Chapter of Guild of Students, said she is very grateful for the award.

“I am humbled, appreciative, and elated to have received the bursary.  The help it has provided acts like a catalyst for me to work harder,” said Stedman. “It will also prove to other students that hard work does pay off, and that UWI is looking out for the good of its students.” Riley is a BSc Accounting student and she is the immediate past Assistant Secretary/Treasurer of the Dominic Chapter of the Guild of Students.

“I am inspired to know that UWI is willing to stand in the gap for individuals like me by investing in our future,” Riley remarked.  “This financial aid came at an opportune time and it will undoubtedly ease some of the financial burden I face in my final year of study.  I look forward to the completion of my studies and embarking on my career, so that I too, may contribute financially to the educational pursuits of the young and less fortunate who definitely deserve the prospect of a better future.”

The award is funded by proceeds from the UWI Toronto Gala held in March. The benefit gala, which is currently in its third year, celebrates the achievements of esteemed members of the Canadian-Caribbean community while it raises funds to provide assistance for UWI students in need.  Six UWI Open Campus students received the award this year.

Maya Wiley: Trump’s Been A Danger To Our Democracy Since Day One | Deadline | MSNBC

In his Fox News interview with Chris Wallace, Donald Trump attempts to sow doubt about the outcome of November’s election by saying he might…

Sen. Sanders: ‘How Great Is An Economy Where People Go Into Desperation?’ | Stephanie Ruhle | MSNBC