Are "undecided" voters a myth or reality? Are the presidential debates giving people enough information to go on?
RELATED: Could President Trump back out of future debates if the Commission on Presidential Debates changes the rules?

The first debate of the 2020 general election between President Donald J. Trump and former vice president Joseph R. Biden was a bit of a disappointment, but not in the way many presidential debates are disappointing. This one provided plenty of fireworks. The debate took place on Tuesday night, and by Wednesday afternoon, the Commission on Presidential Debates had sent out a memo stating that they would be making changes to the format to curb participants from interrupting one another.

Phillip M. Bailey discusses with USA TODAY's 2020 Elections editor Annah Aschbrenner the substantive, if any, points of the debate, the coming changes, and gives a preview of how the VP debate will be a vastly different event.

Annah and Phillip also discuss whether these debates are necessary, as the percentage of the electorate that considers itself "undecided" is shrinking rather quickly,

Rudy Giuliani On Covid-19: ‘People Don’t Die Of This Disease Anymore’ | All In | MSNBC 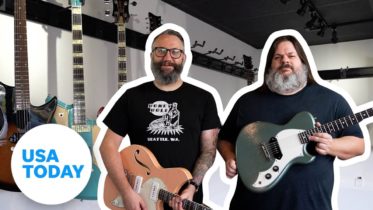 This guitar company keeps making music despite facing the challenges of a pandemic. RELATED: This Black-owned sweet potato cafe is defying the COVID-19 odds…

How to achieve a successful protest: the two key ingredients | Just The FAQs

Donald Trump: ‘Vaccine or no vaccine, we’re back’