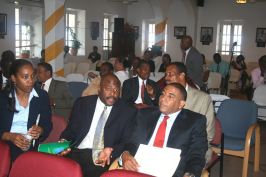 launching of the Public Dialogue on the OECS  Economic Union, Chairman of the OECS Authority and Prime Minister of Dominica, Hon. Roosevelt Skerrit  spoke of the  transcending imperative for member States of the Organization of Eastern Caribbean States(OECS)to come together to confront the twin challenges of globalization and trade liberalization.

“You will agree that our collective history has taught us that when conditions are worsening, we need to band together in order to survive and prosper,” Prime Minister Skerrit stated at the launching of the public dialogue, an event which was also addressed by the Director General of the OECS, Dr. Len Ishmael and the Governor of the Eastern Caribbean Central Bank, Sir. K. Dwight Venner.

Hon. Skerrit pointed to the pace of globalization and that recent events have “exposed us to the realities of the new dispensation”.

The Prime Minister made reference to the recently concluded negotiations to form an Economic Partnership Agreement between the EU and CARIFORUM, including all CARICOM and OECS nations.

“The argument behind what some would consider a ‘hasty decision’ was that since 1975 and the start of the LOMÉ Agreements, the post-colonial economic relationship between Europe and its former colonies have changed dramatically. The model of development economics that gave birth to LOMÉ died a natural death by 2000 ,” Hon. Skerrit said.

The Dominican leader also said that while the General Agreement on Tariffs and Trade (GATT) offered some protection, “the new World Trade Organisation (WTO) provisions after 1994 stressed reciprocity and free trade at all costs”.

Between 2000 and 2007 some concessions were granted; but the negotiated WTO waiver expired on 31st December, 2007 and could only be extended at considerable cost to CARICOM, including challenges from other countries not enjoying the benefits of preferential treatment, Hon. Skerrit explained.

On the mater of the EPA, the Prime Minister emphasized that the “EPA had to comply with stringent WTO rules”. While acknowledging the EPA exposes Caribbean producers to severe competition, the Prime Minister said it “gives CARICOM duty-free and quota-free access to European markets not only for goods but also for services”.

And in a stark warning the OECS Chairman remarked: “This is therefore a wake up call to get our act together, to integrate and become more competitive. We either swim together or drown one by one. Time is not on our side.”

Be the first to comment on "“WE NEED TO BAND TOGETHER IN ORDER TO SURVIVE AND PROSPER,” SAYS PRIME MINISTER SKERRIT AS DIALOGUE" 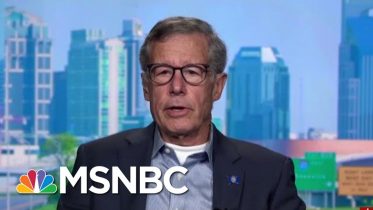 Sen. Bernie Sanders Gets His Turn In The Hot Seat At Debate | Morning Joe | MSNBC

Alberta to send protective equipment, ventilators to 3 provinces in need