Roseau, Dominica – June 02, 2008……The West Coast Road project, one of the four pillar projects the Chinese Government has agreed to finance in Dominica, has moved another step closer to implementation with the arrival in Dominica over the weekend of a Survey Team from the People’s Republic of China.

The purpose of the visit by the Team from Henan Provincial Communication Planning & Survey Design Institute is to carry out a detailed survey of the Road from Roseau to Portsmouth.

The Team which consists of twelve (12) members will be on island for eighty-one (81) days. Their work will be divided into two phases. The first phase consists of detailed surveying works for the purpose of collecting horizontal and vertical data for the preparation of topographic drawings of the existing route.

The second phase consists of fixing the road centre line, measurement and geographic survey, survey for the construction of bridges and culverts, road drainage, coastal defence and collecting additional data for design purposes.

In the discussion with the Chinese team, Hon. George impressed upon members of the team of the economic and social importance of this vital Road which links the Capital City, Roseau to the town of Portsmouth.

First Secretary at the Chinese Embassy in Dominica, Mr. Xu Zhiguang reiterated the commitment of the Chinese government as set out in the Memorandum of Understanding of March, 2004 to rehabilitate this Road.

While in Dominica the Team will work together with engineers and other officials from the Ministry of Public Works and Infrastructural Development. 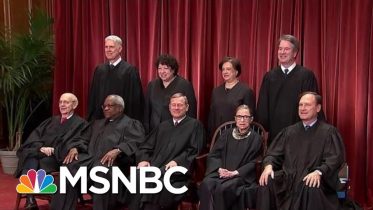 The United States Supreme Court is kicking off its new term with an agenda filled with hot-button issues and cases like DACA, LGBT protections…

Trump’s New Ukraine Scandal Defense: Rick Perry Made Me Do It | The Beat With Ari Melber | MSNBC

Watch how the Lewandowski hearing went off the rails