President Donald Trump vetoed the sweeping defense bill that both chambers of Congress recently passed by veto-proof majorities, setting up a possible veto override that would pit members of his own party against him.
Trump had previously threatened to veto the defense bill, known as the National Defense Authorization Act, because it doesn't include a repeal of Section 230, a law that shields internet companies from liability for what is posted on their websites by them or third parties.
The bill includes provisions to limit how much money Trump can move around for his border wall and another that would require the military to rename bases that were named after figures from the Confederacy.
"Unfortunately," the President wrote in his veto message to Congress, "the Act fails to include critical national security measures, includes provisions that fail to respect our veterans and our military's history, and contradicts efforts by my Administration to put America first in our national security and foreign policy actions. It is a 'gift' to China and Russia."
Trump's veto sparked an immediate rebuke from GOP Sen. Jim Inhofe, the chairman of the Senate Armed Services Committee, who said that the defense bill must become law.
"The NDAA has become law every year for 59 years straight because it's absolutely vital to our national security and our troops. This year must not be an exception. Our men and women who volunteer to wear the uniform shouldn't be denied what they need— ever," Inhofe tweeted.

Sanjay Gupta: I’m concerned because it feels like we’ve given up at this point 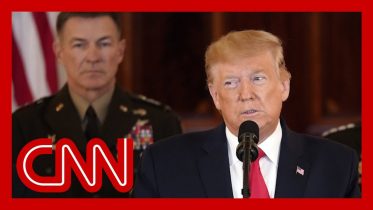 President Donald Trump addressed the nation from the White House, announcing his administration will hit Iran with new sanctions in the wake of its…

Ford on Trinity Bellwoods park-goers: “Do us all a favour and go get tested”

Tim Miller: It Was A ‘Blissful 8 Seconds’ When Trump’s Mic Was Muted | Deadline | MSNBC