Witness who witnessed George Floyd's death were brought to tears on the stand as Derek Chauvin trial continued Tuesday.
RELATED:

Six witnesses took the stand Tuesday in the trial of former Minneapolis police officer Derek Chauvin, and several broke down in tears recounting their memory of the day George Floyd died.

The witnesses included a mixed martial arts fighter, the teenager who recorded the now viral video of Floyd's death, the teen's 9-year-old cousin, two high school seniorswho said they were headed to the store to get an auxiliary cord and a Minneapolis firefighter who witnessed the incident while out on a walk.

Two other witnesses – a 911 dispatcher and a cashier working across the street – testified Monday, and lawyers for the defense and prosecution opened the trial by laying out their case.

Grandma rejoices as she holds grandson for first time | Humankind 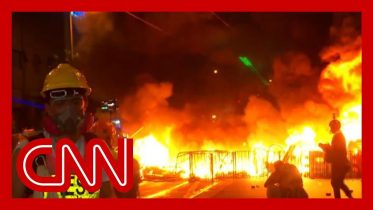 Protesters on Hennessy Road in Wan Chai, where many retreated from police clearance operations in nearby Admiralty, have set fire to a large pile…

How to protect yourself as the nation reopens | Coronavirus Conversations