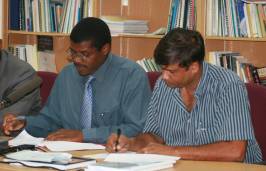 Roseau, Dominica – August 29, 2008……… The Government of Dominica’s massive road building programme shows no sign of slowing down following the signing of a contract recently for the first phase of the Canefield to Melville Hall Road.

Speaking at the contract signing ceremony last week, Minister for Public Works and Infrastructural Development, Hon. Ambrose George explained that the rehabilitation of the Canefield to Melville Hall Road will be undertaken in two phases.

The total cost of the first phase is $29.4 million ECD. This phase is being funded through Development Aid funds and by the Government of Dominica. It is expected construction will last for one year.

The Road from Canefield to Melville Hall is part of the major road network in Dominica and is significant for commuters travelling from the Airport to the City of Roseau. This major road also serves the citizens from the north and eastern parts of the country and is expected to provide much relief to visitors and local commuters.

According to Engineer, Mr. Vivian Trotter, the road will contain a number of features including:

·        Provision of an asphaltic concrete road surface of adequate width for 2-lane operation;

·        Confirmation/restoration of the structural integrity of bridges and culverts and the provision(if deficient) of 2-lane width;

·        Assessment and any necessary restoration of the hydraulic efficiency of the minor drainage system along the roadway;

·        Introduction of measures needed to correct landslides and road subsidence;

·        Provision of roadside parking lots and ‘off-road’ features at sites identified for access to areas of major eco-tourism interest.

In the last few months, the Government’s road building programme has increased in intensity. Rehabilitation works are continuing on the Road from Blenheim to Thibaud, Sultan-Warner and Campbell.

Only weeks ago work started on the Valley Roads Improvement Project, better known as the Road Improvement and Maintenance Project (RIMP).

Recently a Chinese Survey team left Dominica after having completed a detailed study of the Roseau-Portsmouth Road. Work has started on the final designs with construction of this vital road expected to begin in 2009.

In addition, Government intends to sign a contract soon for the Roseau Road Reinstatement Project, funded by the Kuwaiti Fund for Arab Economic Development. That project will involve, among other things, the construction of a bridge at the end of Bath Road over the Roseau River. 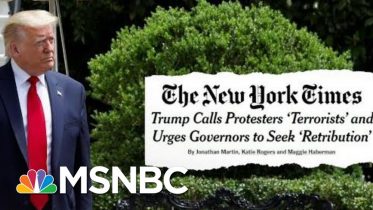 President Trump, dismissing advice to tone down his rhetoric, calls governors “weak” in their responses to protests. Aired on 6/1/2020. » Subscribe to MSNBC:…