Credit unions, a growing financial powerhouse in the Caribbean, are preparing themselves for tighter oversight.

So too are insurance companies.

Last year’s collapse of the Port of Spain-based C L Financial empire was a result of weaknesses in regulation of the non-bank finance sector, according to Caribbean governments.

The president of the Caribbean Confederation of Credit Unions, Yvonne Ridguard, said in a release that the association supports “prudential and proportional oversight” for credit unions.

She said: “Growing liquidity in the region has brought the need for better supervision and stronger regulations to ensure that credit unions are making prudent investments on behalf of their members, who need access to deposit insurance systems comparable to those offered by banks.”

According to the World Council of Credit Unions, at the end of 2009, credit unions in the Caribbean (16 countries) had 2.8million members, savings of US$3.2billion and assets of $4.1billion.

In its latest statement on Dominica, the International Monetary Fund said one credit union on the island was larger than all but two commercial banks.

“The collapse of the CL Financial Group and large role played by credit unions underscore the need to strengthen the recently established Financial Services Unit, the single regulatory unit for the non-bank financial sector,” the IMF said.

It is a message the Fund has been repeating to other Caribbean government while also recommending stronger cross-border regulation.

Most of the fall-out from the C L Financial demise was in the insurance sector, which will also be more closely supervised.

Authorities across the Caribbean are still struggling to salvage the remnants of the grouping’s Clico and British-American insurance operations.

They are also in the process of upgrading their regulatory insurance frameworks to make them more focused on risk, capital and corporate governance, according to the president of the Insurance Corporation of the Caribbean.

Douglas Camacho told the Business News Americas news service that some countries had regulations that were 30 or 40 years old.

But he said the regulatory reforms may lead to international insurance groups buying up insurers in the region.

That’s because some local insurers may not be able or willing to come up with the additional capital that the new rules will require.

As a result, he said the region will have fewer but bigger and better structured insurance companies which will make them more attractive acquisition targets to international groups.

Be the first to comment on "Credit union growth attracts regulators" 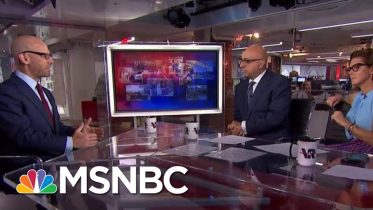 What Are The ‘Red Flags’ That Warn Of Gun Violence? | Velshi & Ruhle | MSNBC