Before
the long, tortured journey of trying to determine the lawful constitution of
the Parliament of Dominica following the 2009 general election, Roosevelt
Skerrit hailed as a “witness of truth” following his appearance in a BVI court
in 2009, was required to answer truthfully one simple question: Do
you, or do you not, have a French passport?

A
clear, honest answer to the question would have spared the nation the pain and
suffering it has been put through in this on-going struggle to defend the
constitution and uphold the rule of law.

The
“witness of truth” chose instead to abandon the honourable conduct expected of
honourable members of Parliament in favour of playing the games of trickery and
deception that lawyers design for those clients who are satisfied that the
truth and fact of their challenged actions cannot succeed in court.

Skerrit
confessed that he was a citizen of France, but that such citizenship was
attained through his mother and not by his own act. In other words, according
to the provisions of Constitution at 32.1.A, the involuntary circumstances
through which he came into French citizenship would not disqualify him from
membership in the Dominica Parliament. But Skerrit’s possession of a French
passport as an adult is an entirely different matter as it represents “acknowledgment
of allegiance to a foreign power or state” by virtue of his own act.

The
February 2009 Appeal Court ruling in the Jamaica case of Abe Dabdoub versus Darryl
Vaz, clarified that issue of dual citizenship disqualification for membership
in Parliament and has become the legal authority most relied on in this regard

Skerrit
himself cited Dabdoub versus Vaz in his letter to the French authorities
seeking immediate renunciation of his French citizenship on November 27th,
2009, eight days after he announced the date for the election that he alone had
the authority to call.

Like
Skerrit, Vaz got his second citizenship through his mother and the court
accepted that this involuntary attainment of US citizenship did not disqualify
him from sitting in the Jamaica Parliament. Vaz was nonetheless disqualified
because as an adult he was in possession of and used a US passport.

As
such, there is no way Skerrit could have been thinking about French citizenship
through his mother when he referenced Dabdoub versus Vaz in his letter to the
French Embassy:

Quite
clearly, the possession of a foreign passport – the reason for which Vaz was
disqualified – was the only thing on Skerrit’s mind in that reference to “new
questions about dual citizenship” raised by the “recent court decision in
Jamaica”.

Skerrit
then went on to confess that he was the holder of a foreign passport in letter
to voters in the Vielle Case constituency dated December 17th, 2009.
In his ruling on the applications by Skerrit and company to strike out the
various charges brought against them in the election petitions following the
2009 election, Justice Errol Thomas reduced the case for trial to the bare
bones of its simplicity:

At
paragraph 173 of his August 2010 ruling, Justice Thomas notes:

“In the case
of Mr. Roosevelt in DOMHCV0007/2010, the fact of citizenship is not denied
having been acquired in his infancy. However, the matter of the passport is
rejected in the Application filed on 30thMarch, 2010. However in ANNEX C
to the said Application, being a letter to “Electors” dated 17th
December, 2009, the matter of “my
possession of a foreign passport” is raised. But nothing more is said
except that: “Despite what you have heard I am validly nominated and your votes for me will not be thrown
away.”

I understand
Justice Thomas to be indicating that given the provisions of 32.1.A of the
Constitution and having regard to the February 2009 Appeal Court decision in
Jamaica, you cannot confess to be in possession of a foreign passport as a big
grown man and at the same time state that you are validly nominated for an
election to the Parliament of Dominica

And so at
paragraph 193, Justice Thomas concludes:

“Accordingly, the applications to strike out…
paragraph 7 of the Maynard Joseph Petition are hereby refused. Therefore,
Petition…DOMHCV2010/007 will proceed to trial on the sole issue of
disqualification for nomination and election…”

The foreign passport of Roosevelt
Skerrit therefore became a crucial document for examination by the court in its
truthful and expeditious determination of Skerrit’s qualification for
nomination on December 2nd, 2009 and election on December 18th,
2009. Passports are not issued in duplicate and certainly not to any person other than the owner.

Lawyers for the petitioners made a
written request for disclosure of Skerrit’s passport. The lawyers for the
respondents replied asking for the legal authority on which the passport was
requested. The authority was provided. There was nothing further from the
respondents. So the petitioners asked the court to order disclosure. Justice
Gertel Thom ruled that the court has no jurisdiction to order disclosure of
Skerrit’s passport. The petitioners then issued a subpoena duces tecum to
compel Skerrit to produce his passport. In an application to set aside the
subpoena, Skerrit’s lawyers told the court that presentation of the passport
would amount to an act of self-incrimination in respect of which he needed the
protection of the court. Justice Gertel Thom set aside the subpoena. She said
her reasons would be given later.

Note well that nowhere in response to this
abundance of circumstantial evidence pointing to Skerrit’s possession of a
foreign passport have you heard any statement to the contrary from Skerrit.

Indeed, he has not said he does not
have a foreign passport. He has simply told the people of Dominica  that he cannot make it available to
the court.

And so barring some more triumphant
absurdities from Gertel Thom, Skerrit and company will soon have to place their attempts at trickery and deception in this matter before the appeal court of Chief Justice
Hugh Rawlings.

But make no mistake about it; the
simplicity of this case has brought us to the watershed where learned justices
must choose between the integrity of the regional judicial system and an
apparent fascination in some judicial circles with facilitating the anti rule
of law machinations of a rogue Prime Minister.

“To do what is right and just is more acceptable to the Lord than sacrifice…” Proverbs 21:3

Be the first to comment on "DISQUALIFICATION SIMPLICITA AT THE WATERSHED" 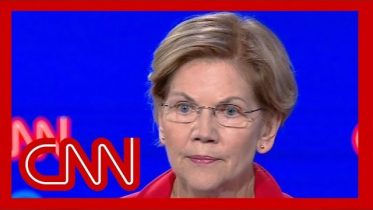 Elizabeth Warren to Bullock: We don’t play into Trump’s hands

Unpacking The Trump Presidency: ‘How Can You Say It’s Working?’ | MTP Daily | MSNBC