ROSEAU, Dominica, May 29 – Dominica will send a letter to the British government next week seeking permission to recognize the Trinidad-based Caribbean Court of Justice (CCJ) as its final court, replacing the London-based privy Council, Prime Minister Roosevelt Skerrit has said.

“Once we satisfy the Constitutional requirements we will go forward. We had delayed it to allow for consultations as people had requested though we have had serious consultations over a period of time, the CCJ came into existence since 2001 and we are in 2013, but we delayed it for consultation,” Prime Minister Skerrit said on the state-owned DBS radio.

“We wrote to the various organisations seeking to receive their views on the matter, so I think sufficient time has elapsed and it is now time for us to move full speed with the recognition of the CCJ as our final court,” he said.

Skerrit said that the letter to London has already been drafted.

“It’s been ready for several weeks now. The government’s resolve is to move in recognising the Caribbean Court of Justice as our final court,” he said.

Skerrit reminded radio listeners that “Britain has said to us on several occasions we have overstayed our welcome, it is not a situation where we are in any tug of war with the United Kingdom. (CMC)

Re: A People in arrears. 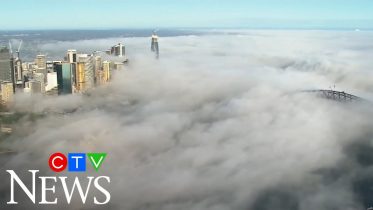 A thick and white morning fog was captured by a drone over Sydney, Australia, giving spectacular images of the phenomenon. Subscribe to CTV News…

Trump pulls back on approved military strikes on Iran

Don Lemon to Trump: What’s the matter with you?