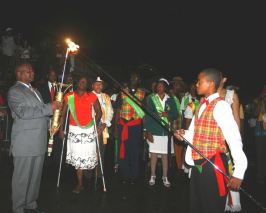 Roseau, Dominica – January 1,  2008………………..Not even intermittent showers were enough to stop hundreds of Dominicans from  converging  on the Dame Eugenia Charles Boulevard in Roseau from 3 am on January 1, 2008 for Reunion Wivé-  an activity full of symbolism,  heralding the start of a year long programme of activities in commemoration of Dominica’s 30th Anniversary of Independence.

The Eugenia Charles Boulevard was impressively decorated with arches as well as representations and illustrations of Dominican and Caribbean life and culture.

The highlight of Reunion Wivé was the arrival of the Reunion Torch on a Kalinago Flotilla of canoes after which the Carib Chief of Dominica, Mr. Charles Williams symbolically handed over the Torch to the Prime Minister of Dominica, Hon. Roosevelt Skerrit in full view of the hundreds gathered to witness this  historic event.

The Reunion Torch then changed hands ten times to individuals representing various segments of the Dominican population to include an elder, a politician, a disabled person, a sports personality, the President, a Kalinago child  among others.

The lighting of the permanent reunion flame on the site of the old fountain on the Boulevard  by a Kalinago boy was a poignant moment that will undoubtedly go down in the annals of  Dominican history.

The lighting was followed by an impressive fireworks display as the Capital City, Roseau came alight.

The Praise and Worship segment included participation from the Bishop of Roseau, the Association of Evangelical Churches, the Muslim and Rastafarian Communities among others. There were performances from the Kalinago people of Dominica, the Music Lovers Government Band, the Dubique Bele Group, the Judah Steel Orchestra and the Shaka dancers.

Following the conclusion of the official opening ceremony at just after 8am there were activities and performances throughout the day.

There were performances by Swinging Stars, Tambata Drumming Group, Cool Steel Pan, Caribbean Vibes, Sakis, and the First Serenade Band  among others.  (Ends) 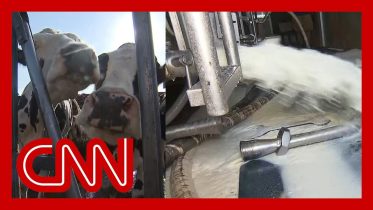 CNN's Rene Marsh investigates Per- and polyfluoroalkyl substances, or PFAS, and their effects across the US. The CDC says PFAS are found in the…

Political Tribalism With Amy Chua | Why Is This Happening? – Ep 7 | MSNBC

Duchess of Cambridge: ‘Parenting in the pandemic is ‘exhausting’