Donald J. Trump paid $750 in federal income taxes the year he won the presidency. In his first year in the White House, he paid another $750.
He had paid no income taxes at all in 10 of the previous 15 years — largely because he reported losing much more money than he made.

As the president wages a re-election campaign that polls say he is in danger of losing, his finances are under stress, beset by losses. Hundreds of millions of dollars in debt coming due that he has personally guaranteed. Also hanging over him is a decade-long audit battle with the Internal Revenue Service over the legitimacy of a $72.9 million tax refund that he claimed, and received, after declaring huge losses. An adverse ruling could cost him more than $100 million.

The tax returns that Mr. Trump has long fought to keep private tell a story fundamentally different from the one he has sold to the American public. His reports to the I.R.S. portray a businessman who takes hundreds of millions of dollars a year yet racks up chronic losses that he aggressively employs to avoid paying taxes.

Now, with his financial challenges mounting, the records show that he depends more and more on making money from businesses that put him in potential and often direct conflict of interest with his job as president.

The New York Times has obtained tax-return data extending over more than two decades for Donald Trump and the hundreds of companies that make up his business organization, including detailed information from his first two years in office. It does not include his returns for 2018 or 2019. This article offers an overview of The Times’s findings, and according to the New York times, additional articles are going to get published in the coming weeks.

The returns are some of the most sought-after and speculated-about records in recent memory. In Mr. Trump’s nearly four years in office — and across his endlessly hyped decades in the public eye — journalists, prosecutors, opposition politicians, and conspiracists have, with limited success, sought to excavate the enigmas of his finances. By their very nature, the filings will leave many questions unanswered, many questioners unfulfilled.

They comprise information that Donald Trump has disclosed to the I.R.S., not the findings of an independent financial examination. They report that Mr. Trump owns hundreds of millions of dollars in valuable assets, but they do not reveal his true wealth. Nor do they reveal any previously unreported connections to Russia. 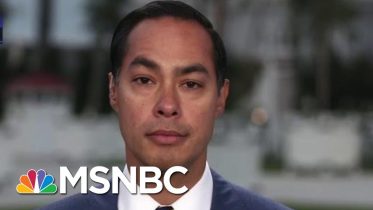 Castro: The Best Way To Channel This Anger Is To Register People To Vote | The Last Word | MSNBC

Presidential candidate Julian Castro talks with Lawrence O'Donnell about this weekend's mass shootings and what to do about the president's rhetoric heading into 2020….