We are delighted to report that Caribbean tourism reached another milestone in 2017, surpassing 30 million stay-over/tourist visits for the first time and reaching an estimated US $37 billion in total visitor spending. This good news was despite the devastating September hurricanes. The performance in 2017 was primarily supported by sustained economic growth in all of our major source markets.

Stay-over arrivals were on track for a strong performance during the first-half of 2017, growing by an estimated 4.8%. However, there was a major slowdown in the second half performance due to the impact of the September hurricanes as tourist visits declined by 1.7%. These outcomes resulted in an overall increase of 1.7% to reach 30.1 million visits, marking the 8th consecutive year of growth, albeit slower than the average global growth rate of 6.7%.  Therefore, the Caribbean market share of global visits in 2017 shrunk by 0.1 percentage points, to register 2.3% of the market.

Among the destinations, tourist arrivals showed uneven growth. Several countries reported double-digit increases in 2017 such as Saint Lucia (11%), Belize (10.8%), and Bermuda (10.3%), while the hurricane-impacted countries recorded decreases ranging from -18% to -7%.

The contributing factors to the excellent performances in those countries included greater air access from the source markets to the region and the realisation of significant investments, including hotels, to enhance the tourism product.

Regarding the major Caribbean sub-regions, the US Territories (-7.9%), the Dutch Caribbean (-6.6%) and the Organization of Eastern Caribbean States (OECS) (-3.6%) reported declines, while the grouping dubbed Other Caribbean comprising Cancun, Cozumel, Cuba, the Dominican Republic, Haiti and Suriname, which accounts for almost half of all arrivals to the region, recorded an increase of 6.0% and Caricom recorded an increase of 1.7%.

Most major source markets recorded growth except the South American and Caribbean markets which declined by 6.5% and 1.3% respectively, reflecting weak economic conditions.

Our major source market, the U.S., grew by approximately 0.5% to reach an estimated 14.9 million visits to the region. This performance was attributed to solid economic growth, low unemployment rate and high consumer confidence in the US.

Arrivals from the European market totalled 5.8 million and improved by an estimated 6.2%, the strongest growth among the main markets, in spite of terrorist attacks in some countries, and the continuing Brexit negotiations and the related uncertainties.

Visits from the Canadian market rebounded in 2017, growing by 4.3% compared to a decline of 3.1% in 2016. The country’s strong economic performance and increased seat capacity to the region helped support this recovery.

Despite the slight increase in arrivals to the region, hotel occupancy fell by 1.2%, according to STR Inc (formerly Smith Travel Research), a U.S. company that tracks supply and demand data for the hotel industry. However, the primary revenue metrics were all up, average daily rate (ADR) increased by 1.9% to $204.64, and revenue per available room grew by 0.7% to $135.85.

Notably, the hotel performance indicators excluded most of the hurricane-impacted destinations at this time, due to the disruption in operations caused by the hurricanes.

The September hurricanes caused significant disruption for airlines during the final quarter of 2017. As a result,  seat capacity fell by 7.2% in the fourth quarter, according to OAG, an air travel intelligence company. Nevertheless, overall seat capacity increased by 1.7% in 2017, reflecting a solid first-half performance.

Cruise passenger arrivals also set a new landmark in 2017, despite the hurricanes, reaching an estimated 27.0 million visits to the region, which is 2.4% higher than recorded numbers in 2016. The cruise passenger performance mirrors the performance of tourist arrivals, as it grew strongly (4.6%) in the first half of 2017, but contracted marginally (-0.4%) in the second half of the year. Indeed, cruise passenger arrivals fell dramatically in September by some 20%. However, growth resumed in October, which saw a 2% increase.

Consistent with increases in stay-over and cruise visits, total visitor expenditure is estimated to have increased by approximately 2.6% to reach US$37.0 billion in 2017. This performance marks the eighth consecutive year of growth. Overall, stayover visitors spent an estimated US$34.2 billion or US$1,230 per trip compared to US$1,129 per trip in 2016.

Global economic conditions are expected to be favourable in 2018. All of the major economies are projected to grow strongly, oil prices are expected to remain relatively low, and hourly wages are expected to increase again in the US following years of stagnation. These factors bode well for tourism in the Caribbean. On the downside, there is rising geopolitical tensions, the persistent threat of major terrorist attacks, and the heightened risk of extreme weather events. Consequently, we are projecting that tourist arrivals will increase between 2 and 3% in 2018.

According to the Florida-Caribbean Cruise Association (FCCA), booking data indicates that demand for Caribbean cruises remains quite strong. The demand is supported by their multimedia campaign, “The Caribbean is Open”, launched soon after the hurricanes. Consequently, we project that cruise arrivals will accelerate in 2018, to register a growth rate of between 2 and 3%.

Be the first to comment on "Embargoed! Caribbean Tourism Performance Report" 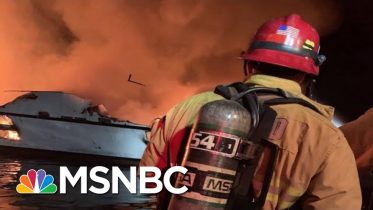 The U.S. Coast Guard was dispatched to rescue more than 30 people caught in a fire on a boat off Santa Cruz Island early…

FORMER EDUCATION MINISTER HON. RONALD GREEN SWORN IN AS LEADER OF THE OPPOSITION IN DOMINICA

Cohen: ‘I Was Acting At The Direction Of And For The Benefit Of Mr. Trump… To Protect Him’ | MSNBC

Our Real Estate Obsession With Giorgio Angelini | Why Is This Happening? – Ep 13 | MSNBC