BRIDGETOWN, Barbados Wednesday April 13, 2011 – Unseasonable heavy rains at the start of this week have wreaked havoc across some eastern Caribbean islands causing widespread flooding and damage.

A combination of squalls dumped rain across the islands from before daybreak on Monday morning with residents in St Lucia and St Vincent complaining about hours of non-stop rainfall and flooding.

Reports from Barbados and Grenada have highlighted localised damage.

In Barbados, some Gills Terrace, St Peter residents had to scramble for their lives in the wee hours of yesterday morning, as raging waters took over their homes, leaving a path of mud and destruction.

High watermarks, traces of debris stuck to the sides of their homes, muddy sludge and a car was lodged amongst a heap of debris and rubble, after being washed away from home, was some of the evidence of the effects of the heavy rainfall.

Shocked residents said while they were accustomed to flooding in the area, last night’s showers were unexpected, catching most of them off-guard in the middle of the night.

By 1 a.m. the water, which usually travels from as far as Farley Hill, down to Mount Brevitor, into the White Hall area, The Whim, through Gills Terrace and into the Speightstown canal, seemed to have broken free of its constraints, causing the raging force which Gills Terrace residents experienced.

One resident said he tried his best to put most of his items on higher ground when the waters started to come in but eventually had to grab his 70-year-old mother and rush out.

The rains caused landslides on the Caribbean island of Grenada, where officials on Tuesday relocated families away from swollen rivers that flooded homes and destroyed small fishing boats.

“We should be in the dry season, but we are experiencing so much rain,” Grenada Prime Minister Tillman Thomas said while he toured the island’s northwest region, visiting St. John and St. Mark which had been affected by persistent overnight showers.

Flooding turned the small coastal town of Gouyave into a jumble of mud, trees, sand and stones. More than 20 families were left without shelter. Gouyave resident and Government Information Service staffer, Twana Sam, reported that as many as 11 boats had sunk sink in Victoria, St. Mark. Early reports also stated that there were five major landslips in Gouyave, with about three houses lost along the river and other properties flooded. However, there were no reports of lost of lives.

Reports were that the rains have affected other parts of the island, including South West and North West St. Andrew, resulting in rising water levels in some rivers and landslides in the Grand Etang area. Areas in Carriacou were also said to have been affected by the showers. 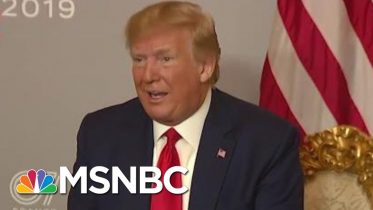 Speaking at a bilateral meeting with his Egyptian counterpart, President Trump said he believes he can strike a trade deal with China. » Subscribe…